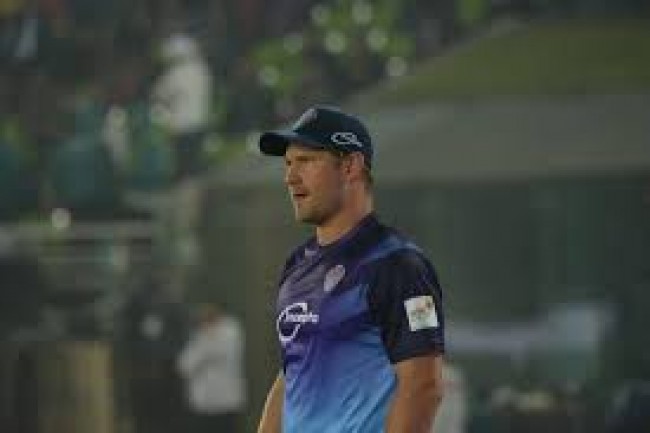 Ending a four-match run-draught, Shane Watson dazzled with a sublime 36 ball-68 as Rangpur Rangers recorded their fourth victory in the Bangabandhu Bangladesh Premier League (BBPL) with a 38-run win over Sylhet Thunder at the Sylhet International Cricket Stadium on Friday.

Watson’s cracking knock steered Rangpur to hefty 199-5 which proved to be too hot to handle for Sylhet who finally was held back to 161-9 in 19.5 overs. Their last batsman Monir Hossain was unable to bat due to injury.

Watson led the run-fest in front of a capacity crowd by his first half-century in the tournament, a knock that was studded by six fours and five sixes

His fellow opener Naim Sheikh complemented his effort with 42 off 33, hitting seven fours and one six.

The duo combined for a 77-run for the opening stand after Sylhet Thunder sent them in batting.

Naim scored consistently in this tournament but consistently got out when a big knock appears to be on the cards. And this time also it was no different as he got dismissed by Monir Hossain.

Watson who fell for single digit figure in the last four matches, finally broke the jinx and kept the fielders busy, hitting the bowlers all corner of the park.

Cameron Delport also looked to be in threatening mood as he played a second fiddle to Watson to share further 61-run for the second wicket stand.

As the match entered into the last powerplay with Watson and Delport looking set for final carnage, Ebadot Hossain brought a huge relief, dismissing Delport and Watson in consecutive deliveries.

Delport made 25 off 18 with two sixes while Watson was undone by a perfect Yorker.

Sylhet then strangled Rangpur innings before Mohammad Nabi (23) and Fazle Rabbi (16*) broke the shackle to take the side closer to 200.

Sherfane Rutherford resisted even though Mohammad Mithun, who looked in good touch perished to rash shot for 30.

Mustafizur Rahman and Cameron Delport triggered a middle order collapse amid Rutherford’s sustained aggression. With asking run rate still in favour, Rutherford looked to take the match away before an unfortunate run-out ended his earnest endeavor. He blasted a 37 ball-60, cracking five fours and three maximums.

Rutherford’s dismissal effectively ruled out Sylhet’s any chance of the victory and the rest of the batsmen then just reduced the margin.

By virtue of this victory, Rangpur now stays at sixth position with eight points from 10 matches and kept them alive in the play-off race mathematically if not practically. Already eliminated from the race, Sylhet Thunder continues to be at bottom of the table with two points from 10 matches.