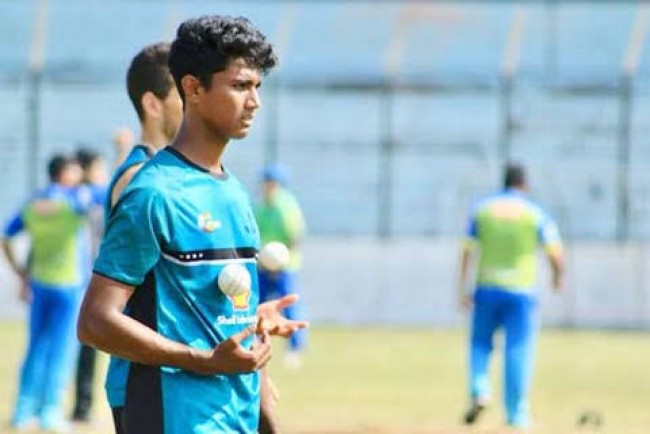 The key to Dhaka Platoon’s 12-run victory over Khulna was that they effectively could neutralize the threat of Rilee Rossouw and Mushfiqur Rahim. But their dismissal did not come in by luck, instead there was specific plan for both, which Hasan Mahmud effectively executed to script the fascinating victory.

Even though Mushfiqur Rahim almost sailed the side home, young Mahmud didn’t get panicked rather he persisted with his plan and eventually got the success.
After his side piled up 172-4, Mahmud kept Dhaka aloft over Khulna, dismissing Rossouw and then when Mushfiqur Rahim was in marauding mood, he snapped him up also to script the victory. He finally finished with 4-32, which was his career-best bowling.

Terming the delivery with which he got the prized scalp of Roussouw, he said, “The plan for Rossouw was to bowl wicket-to-wicket as he played the ball that has slight width. That’s why the plan was devised that way.”

He also credited Anamul Haque Bijoy for his advice to hone the backhand slower with which he got Rossouw.

“I have been practicing with the backhand slower from the Emerging Asia Cup. Bijoy advised to do a change-up. Even though I delivered it my own, I followed Bijoy’s advice also. It hit the length perfectly.”

“To bowl Mushfiqur Rahim is very tough because he is a 360-degree player who could play all shots around the wicket. The plan for him was to bowl wide Yorker, keeping three fielders in the offside. But he kept thriving. So I tried different things and delivered slow full toss and he top-edged it.”

In his first two overs, Hasan Mahmud conceded just 5 runs to claim two wickets but in last two overs, Mushfiqur Rahim ruined his economy rate before he laughed the last.

The former Under-19 pacer said he got the momentum from the first over.

“If you can bowl well from the first ball, you certainly will get the momentum. If you can beat the batsman, you can do well,” he said.

“There were senior players like Mashrafe, Tamim, Mominul who helped me lot and told me repeatedly not to be nervous,” he remarked.

Hasan Mahmud dubbed BPL as the big stage for him and said his target is to prove him here.

“Ahead of the tournament, I set a target to do well here. It’s a big platform. Hopefully I can utilize the platform well.”