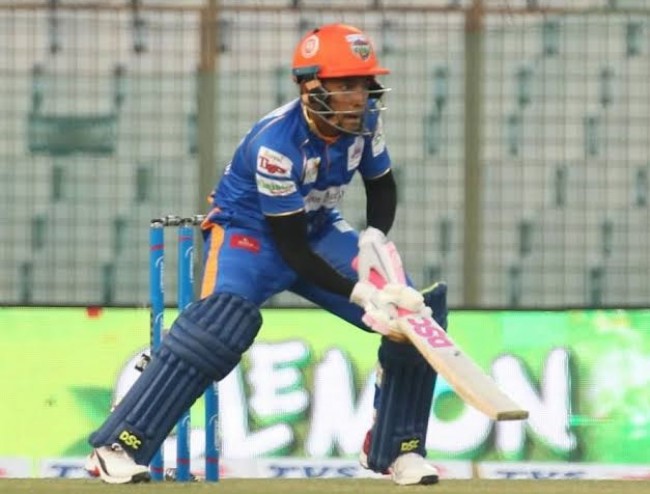 Khulna Tigers coach James Foster appeared not to be happy seeing Mushfiqur Rahim in the losing side after an exceptional knock that gave the side a hope to win despite being on the knife-edge of a defeat right from the start.

A gem of fast bowling from Hasan Mahmud reduced Khulna to 44-4 when they were chasing Dhaka Platoon’s 172-4. But Mushfiqur Rahim revived the innings and kept Khulna in a position of winning amid the escalating asking run rate.

“He played exceptionally well and his batting deserves a huge amount of credit. He has played similar innings like this in this tournament, in fact right throughout his career. It was a real shame he ended up on the losing side,” Foster said after the match.

“He scored at a really high rate which is not easy to do. One of the big positives in this tournament for us is that we have generally shared the scoring rate around than just depending on one person.”

With the asking run rate increasing alarmingly, Mushfiqur scared Dhaka Platoon, playing the shots at will before he got out in the penultimate over. Khulna eventually lost the match by 12 runs.

“He was very busy and I think the first ball he played, he reverse-swept Shadab for four. He is in very good touch and he obviously has very clear game plan, his ability to rotate the strike very well, handle spinners well and also the matchups. He waited for his moment to take certain bowlers on. Ultimately that is the key for T20 batting in general,” Foster pointed out.

Foster however insisted that Asif Ali’s 13 ball-39 not out indeed was the reason behind their defeat. After the arrival of Asif in the crease in 17th over, Dhaka scored 54 runs off 21 balls to take the innings in a respectable position.

“I think Asif Ali’s innings was partly why we couldn’t win the game. I think if you were to take his innings out, we would have probably won the game. Even then, towards the end we had the chance to win the game,” Foster revealed.

The Khulna coach also disclosed as to why they didn’t include Hashim Amla in the team.

“We just felt that for our team, given their matchups I thought it would be better to go with the team that we did,” he concluded.