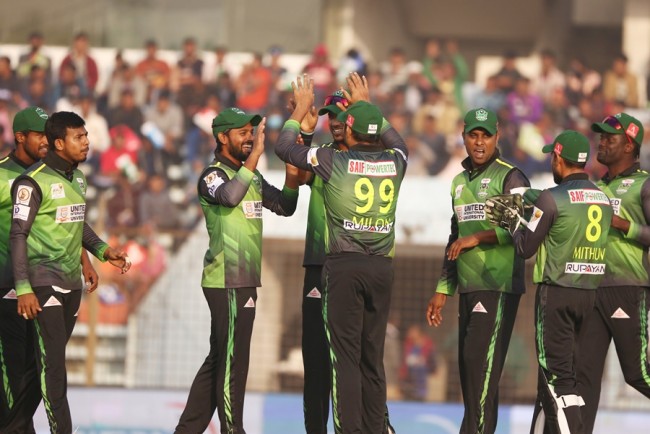 Bolstered by the adorable home crowd, Sylhet Thunder raised the prospect of ending the losing-streak in the Bangabandhu Bangladesh Premier League (BBPL) as they held Cumilla Warriors back to 140-9 in their first match at their home ground at the Sylhet International Cricket Stadium on Thursday.

Sylhet won the all-important toss and sent Cumilla batting in a pitch which looked slower to some extent.

Ebadot gave the side early breakthrough, dismissing Stiaan Van Zyl (10) before Sohag Gazi dented Cumilla further, with the wicket of Soumya Sarkar for 5.

Sohag Gazi however removed Tharanga for his team’s highest 45 and ruined their hope further to make a bigger score.

Ebadot and Rutherford did the rest of the damage as they wrecked-havoc in middle order and lower order in joint venture to make Sylhet heavily favourite to win the game.

Sylhet was eliminated from the tournament already after seven defeats in eight matches. They have been playing to restore the pride just but for Cumilla the match is important to keep them alive in the tournament.