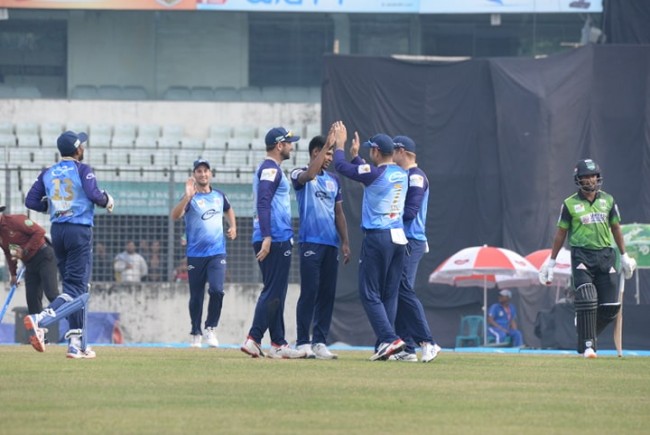 Rangpur Rangers came up with a ruthless performance to stay themselves alive in the Bangabandhu Bangladesh Premier League (BBPL), crushing Sylhet Thunder by seven wickets at Sher-e-Bangla National Cricket Stadium in Mirpur on Monday.

Rangpur’s second victory in seventh matches mathematically kept their chances to seal play-off berth alive but Sylhet crashed out following their seventh defeat in eight matches in the tournament.

Mustafizur Rahman, whose performance was severely criticized finally discovered the old Mustafizur in himself as he led the bowling attack superbly after his captain Shane Watson sent Sylhet in batting.

Mustafizur finished with 3-10 in four overs to help the side restrict Sylhet to 133-9, a below par total, which Cameron Delport made even smaller by hitting a 28 ball-63, with six fours and five sixes. Thanks to his marauding knock, Rangpur gunned down the total with ease, cantering to the victory in just 17.2 overs.

Their start to the chase was disappointing one with captain Watson being out for 1, leaving the side 5-1. But it mattered little as Delport combined for a 99-run with Mohammad Naim for the second wicket stand to take the side closer to victory. While Naim was slow to respond Sylhet’s bowling, Delport smashed everything that came to his way and thereby covered Naim’s slower knock.

Sylhet’s Afghanistan recruit Naveen-ul-Haq dismissed Delport to break the partnership but Naim, with the support of Mohammad Nabi sailed the side home without further fuss. Naim was not out on 38 off 50, hitting two fours and as many sixes while Nabi was unbeaten on 12 ball-18.

Naveen-ul-Haq claimed 2-13 while Ebadot Hossain took the other fallen wicket.

Earlier, Mustafizur stifled Sylhet for runs when his other colleagues were not so up to the mark. The Fizz, as he is adorably called, checked the flamboyance of Sylhet batsmen to create pressure which gave the other bowlers an advantage to claim wicket. Mustafizur then later dazzled with cherry again during the death overs to dismiss Sylhet any hope of making a reasonable total.

Amid Mustafizur’s threatening bowling, Mohammad Mithun stood tall to keep the side flowing. Mithun was the highest scorer for the side with 47 ball-62, hitting four fours and two sixes. No other batsmen even could scorer 20 plus runs. The second highest came from the willow of Sherfane Rutherford who made 16. Captain Mosaddek Hossain Saikat scored 16 while Sohag Gazi contributed 12.