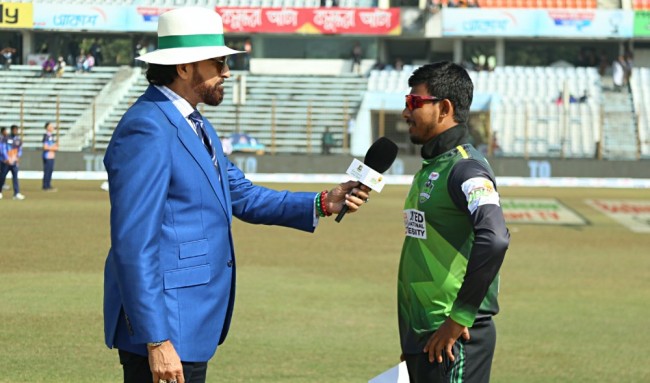 Sylhet Thunder failed to capitalize on their good start as they were held back to mediocre 157-4 against Khulna Tigers in their seventh match of the Bangabandhu Bangladesh Premier League (BBPL) at the Sher-e-Bangla National Cricket Stadium on Saturday.

Being sent to bat first, Sylhet openers Andre Fletcher and Rubel Mea gave the side a decent start, sharing 62-run for the opening stand with the former particularly sending the bowlers in receiving end.

Robbie Frylinck broke through with the wicket of Fletcher for 37, before the West Indian damaged them more.

Frylinck was expensive but he was key in literally ruining Sylhet's hope of making a bigger total as he removed another dangerman Johnson Charles for 17.

Rubel Mea followed the suit at a moment when he was due to give back the side after spending so much time in the crease. He was the highest scorer of the side with 39 that came off 44 balls with the help of two fours and one six.

Pacer Shahidul Islam was the bowler to deny Rubel Mea and he later got the better of  Mohammad Mithun for a duck.

Sherfane Rutherford and skipper Mosaddek Hossain, however, stalled Khulna bowlers’ progress to help the side propel past 150 runs mark.

Rutherford hit two sixes in his 20 ball-26 not out while Mosaddek remained unbeaten on 23 off 18, sending the ball across the ropes for thrice.