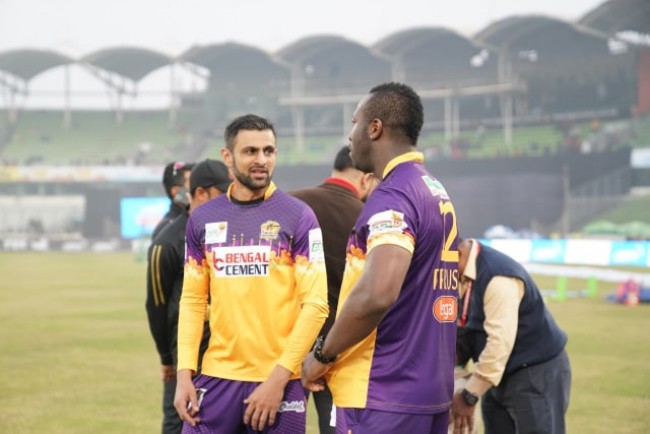 For a moment, Soumya Sarkar appeared as a batsman like Andre Russell, using his muscle power to such extent that it looked Cumilla Warriors would break the defeat jinx to bounce back into the winning-way. His career-best 48 ball-88 not out, studded by five fours and six sixes, of which two were over 100-meter long, thereby went in vain.

The asking run rate, however was too bigger that it was not to be eventually as Rajshahi Royals wrapped up another victory, a 15-run win over Cumilla Warriors by showing yet another clinical performance in the Bangabandhu Bangladesh Premier League (BBPL) at Sher-e-Bangla National Cricket Stadium on Saturday.

By virtue of this victory, Rajshahi took their point to 10 in six games and retained the second spot, behind Chattogram Challengers who acquired 12 points in eight matches.

A whirlwind batting of captain Andre Russell and Pakistan recruit Shoaib Malik after the fluent start from the openers helped Rajshahi compile a hefty 190-3. Soumya Sarkar batted valiantly and picked up his first half-century in the tournament but failed to seal the deal as Cumilla Warriors were restricted to 175-4 eventually to concede their fifth defeat in seven games.

Cumilla opted to bowl first after winning the toss but Liton Das and Afif Hossain proved it wrong by giving Rajshahi a fluent start as they combined for 56 runs off 38 balls for the opening stand.

Left-arm spinner Sunzamul Islam broke through with the wicket of Liton who scored 24 off 19, hitting two fours and one six.

Afif looked set to play a big innings before Soumya halted his march, rattling his stump for 30 ball-43 in which he smote six fours and one six.

Shoaib Malik held on end with utmost confidence and kept the run flowing with captain Andre Russell giving the late impetus. Russell smashed four towering sixes to clobber 21 ball-37 not out as Rajshai piled up 73 runs in the last five overs.

Malik, before being run out in the last ball of the innings clattered five fours and three sixes in his 61.

Mujeeb Ur Rahman, Sunzamul Islam and Soumya Sarkar picked up one wicket apiece for Cumilla.

Cumilla didn’t get the expected fluent start to gun down such big target as their openers Robiul Islam Robi and Stian Van Zyl were stifled for runs. Van Zyl scored 32 ball-21 while Robi made 12 off 15 before their inform batsmen Dawid Malan had a rare day-off in the office. Big hitter Malan was dismissed by Andre Russell for

Soumya then held one end and at the same time paced the innings but there was little support for him on the other hand. He and Sabbir shared a 52-run for the fourth wicket while the asking run rate increased alarmingly. Soumya though responded with ultra-aggressive batting to counter the asking run rate, Sabbir struggled to a bit and finally was out on 25 off 23.

Soumya struck five fours and six sixes in his knock while David Wiese was not out on 16 off 6.