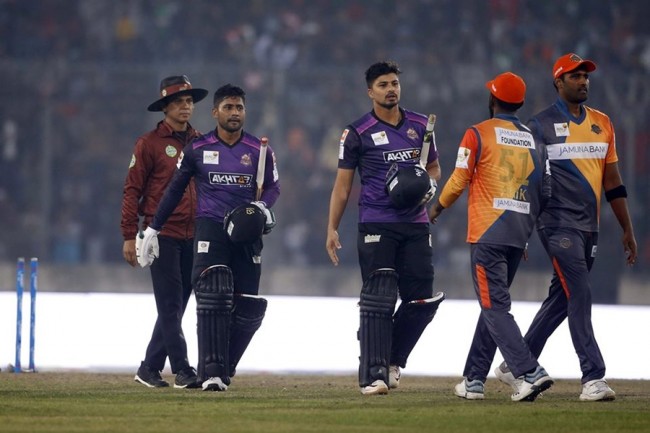 Chattogram Challengers stayed atop in the Bangbandhu Bangladesh Premier League (BBPL) after collecting 12 points from eight games and the reason behind their success is their extremely good ‘teamwork’, said the stand-in captain Imrul Kayes.

The position in which they are now in, it looked they would be the first team to reach the play-off phase.

Unarguably Imrul Kayes’s batting performance is key in keeping Chattogram on top of the point table with 12 points from eight matches.

He struck a sublime 53 ball-54 not out against Dhaka Platoon in an extremely slow pitch to help the side win the game by six-wicket and kept the side in good stead for securing the playoff berth. Earlier he also struck two fifty-plus knocks that came in the winning-cause.

The way he was batting and leading the side even drew the attention of national and Dhaka Platoon captain Mashrafe Bin Mortaza, who heaped a shower of praise on Kayes, stating his innings as the eventual difference between the two sides.

“I am trying to play the way I am playing in the tournament. The praise of Mashrafe is huge but I am trying to give my best. I don’t know how good the work I am doing. However, the team is doing well and everyone is contributing to their best. The teamwork is good and thereby the result is visible,” Kayes told the reporters after the match on Friday.

Kayes’s knock against Dhaka Platoon was termed as one of the best knocks played by any Bangladeshi batsman in this format. Kayes said his plan was to play till the last moment as he knew that if he could stay till the end, he could win the game by his own.

“The plan was to play until the last without being panicked. I had no headache with the strike rate. Just what I want is to play till the end,” he revealed.

Even though he had some good knocks in the T20 format, he was never considered as the batsman for a shorter version format. But Kayes was unfazed by it.

‘Wherever I play, I try to give my best—be it in BPL, DPL or NCL. A player won’t be successful always. And I am not the player who plays any tournament targeting the national team. My policy is to work hard and play well. If they [management] think that I could be handy for the national team, they will definitely call me. If they don’t call me, I have no problem with it.”

As a captain, he is also successful in this tournament as he leads the side by example. In the last BPL, Kayes was appointed as the captain of Cumilla Victorians in the wake of a complex situation and eventually led the side to clinch the trophy. Kayes said he knows the importance of the captaincy and therefore he tries to take the onus.

“Last time when I got the captaincy, I didn’t understand many things but I tried to do what the team needed. I tried to lead the team and play my innings according to the demand of the team. It feels good when I perform well. Since Mahmudullah is not with us due to injury, I feel I have some extra responsibility,” he remarked.