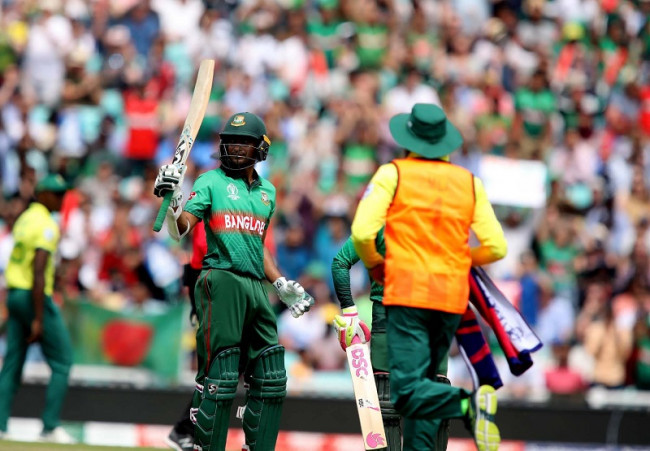 Bangladesh all-rounder Shakib al Hasan said that he is satisfied to stay till the end against West Indies as it helped them earned an important win over the Caribbean in the ongoing World Cup.
Shakib scored a brilliant hundred as they defeated West Indies by seven wickets to keep their hope alive for a spot in the semi-final in the ongoing World Cup at Cooper Associates County Ground in Taunton on Monday.
Shakib, scored his second successive hundred in the tournament making unbeaten 124 runs and led the chase from the front as Tigers reached 322-3 in 41.3 overs after restricting West Indies 321-8 to earn full two points and get back to business in style.
‘’It feels great,’’ man of the match Shakib said at the post match presentation.

‘’To stay at the wicket till the end was the most satisfying thing,’’ he said.

‘’I have been working on batting for the last one and a half months, and it has paid off. At the end of the first innings, we believed that if we bat well we can win. It was a reasonable total posted by the West Indies,’’ he said
Shakib said that he insisted to bat at three as that will provide him with more opportunity in the middle as he felt that batting at five he was not getting enough time to prove his credential as a batsman.

‘’Not sure why I backed myself for the No. 3 spot (laughs), but I thought if I batted at 3 I will get more opportunities and more time in the middlem,’’ said Shakib.
‘’If I bat at 5, I will get in at the 30th over or something, and that's not ideal for me honestly,’’ he said adding that though he chipping in well with the cherry he is confident that he can contribute more in the coming days.

‘’Mehidy contributed with the ball. I have contributed with the ball too, but I think I can get better than this,’’ he said adding they are looking forward to take on Australia and asked the fan to support them in the same way as they backing them until now.
‘’We have to bring our A-game against Australia at the top of their form. I hope the fans will keep supporting us, and they have been magnificent throughout the World Cup,’’ Shakib concluded.