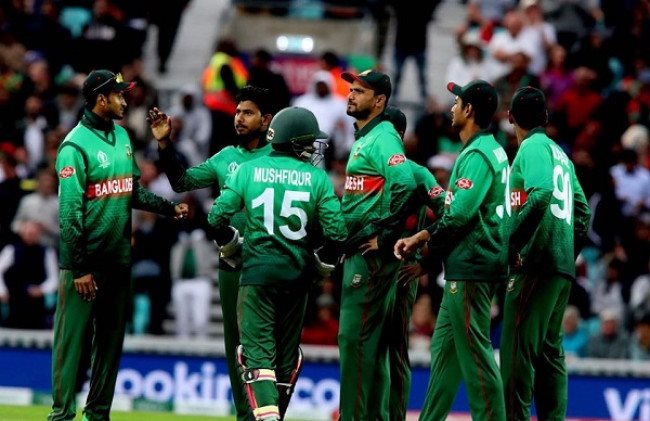 Shai Hope again stood tall against Bangladesh to help West Indies compile a respectable 321-8 in a crucial World Cup game that is a must-win game for both of the sides to stay alive in the semifinal race.

Bangladesh successfully chased down 300 plus total thrice in their cricket history with the highest of 322-4 against Scotland in 2015 World Cup, when Scotland set them a target of 319.

Hope was dismissed for 96 off 121 with four fours and one six which effectively prevented West Indies from any collapse when their big-hitters showed the tendency to play one shot too many and by doing so squandered their good start in a batting paradise.

Opener Evin Lewis struck a 67 ball-70, hitting six fours and two sixes while Shimron Hetmyer hammered 50 off just 26, smashing four fours and three sixes, including one that was 104 meter and disappeared over the stand.

It was the longest six of the tournament until his captain Jason Holder broke just after 15 minutes, smashing one over deep mid-wicket that was 105-meter long.

Hetmyer and Holder basically paced the innings when Hope held together it after West Indies made a slow start.

Bangladesh captain Mashrafe Bin Mortaza won the toss and opted to bowl first at the Cooper Associates County Ground in Taunton, which is smallest ground in England.

The decision seemed to be right when Bangladeshi pacers stifled the Caribbean side’s for runs that resulted the dismissal of dangerous Chris Gayle, who edged one to a moving delivery of Saifuddin to be dismissed for a duck, after playing 13 balls.

As they grew with confidence, Shakib dismissed Lewis for 70 to end the 116-run partnership before he also got rid of Nicholas Pooran for 25.

Hetmyer counterattacked in style to accelerate the innings to such extent that West Indies looked the team to get past 350.

But Bangladesh effectively buried that chances thanks to Mustafizur Rahman who dealt a double strike just before the third powerplay, taking out Hetmyer and Andre Russell for 0.

Coincidentally both Russell and Gayle got out for 0, when they were believed to break the spine of Bangladesh’s bowling in shorter square ground.

However with Jason Holder taking Bangladeshi bowling in disdain, West Indies’ hope to get past 350 was raised one again.

Mohammad Saifuddin  baffled Holder with change of pace to force him offer a simple catch to effectively end this chance once again.

Mustafizur who was torn apart by Hope for 19 runs in an over finally got him when he was just four runs way of his seventh century.

Hope was there for the last hope for West Indies but was dismissed by Mustafizur after trying to pace the scoreboard.  Darren Bravo then took some lusty blow to help the side pile up a respectable total.