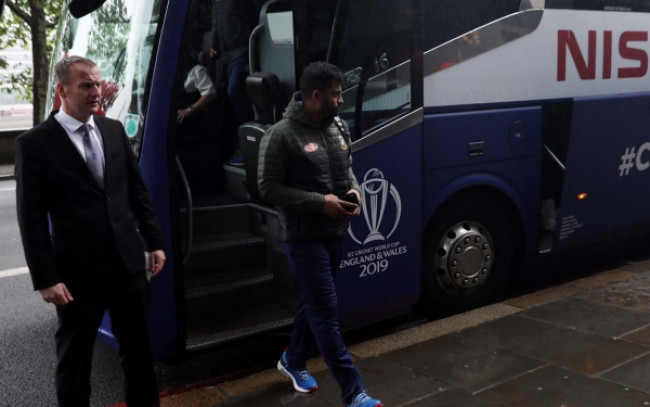 Bangladesh team management seemed to be losing their sleep over some injury scare ahead of their World Cup campaign as some of their leading cricketers are carrying some sort of niggles ahead of the ICC World Cup.

Bangladesh will begin their World Cup campaign on June 2 when they take on South Africa in their opening game of the competition.

Standing just three days ahead of the World Cup, injury has become a major concern for Tigers as their inspirational skipper Mashrafe Mortaza suffered an injury during their warm up match against India on Tuesday.

Mashrafe, who suffered an injury earlier in his right hamstring, was in doubt to play against India but played eventually after feeling well before the match in the morning on Tuesday.

Though he played against India but it looked to have back fired to some extent as he felt some pain in his left hamstring in his sixth over, which has been a problem for him for a long period of time. while pacer

The unexpected niggle of Masharfe only adds more misery into the Tigers dressing room as Mohammad Saifuddin , Mustafizur Rahman and all-rounder Mahmudullah also carrying injury concern. Shakib Al Hasan, who just came out of back muscle injury, was in charge during Mashrafe’s absence in the field.

Bangladesh team physio Thihan Chandramohan inspected his injury condition after the match who said players usually need 5-6 days to recover from such condition but Bangladesh team have four days left ahead of their first match of the world cup.

Mustafiz and Saifuddin are also rumored to have some injury.

Pacer Saifuddin had to take pain killer on the ground to get rid of the pain as he left the ground with thwe pain in his back while Mustafiz bowled brilliantly in his first spell with 135-140kmh speed but he also had pain in his calf muscle.

Mahmudullah, who had some bowling practice in the net on the previous day ahead of their second warm-up match against India, was not able to bowl for his shoulder injury.

Opner Tamim Iqbal was also out of the playing-11 against India with gluteal muscle injury. National team selector Habibul Bashar, though, said it was nothing to be worried about Tamim’s injury as he categorized it as a decision of precaution of the management.

Pacer Rubel Hossain, who suffered a back strain earlier, returned to ground and bowled eight overs against India and picked up two wickets.

However, Mashrafe told reporters that he is expected to be fine before the opening game and insisted that he is more concerned about his team mates.