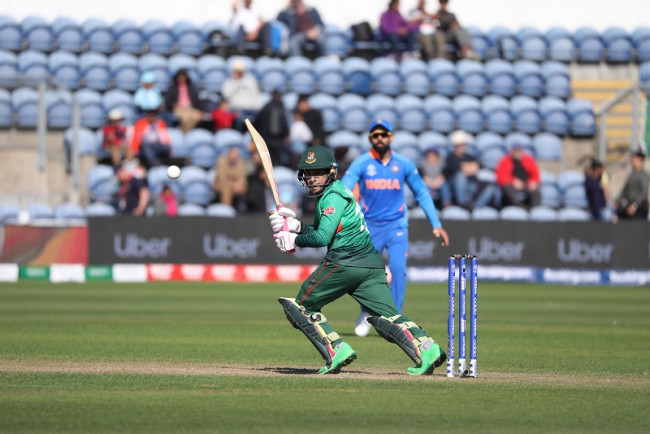 Bangladesh failed to live up to the expectation to adjust with the modern power cricket as they suffered a humiliating 95-run defeat to India to end their warm-up games at Sophia Gardens in Cardiff on Tuesday.

Their first game against Pakistan was washed out without a ball being bowled, meaning they would take on South Africa in their World Cup opener on June 2 at The Oval with no victories in warm-up games under the belt.

Riding on two fluent centuries of KL Rahul and MS Dhoni, India racked up a hefty 359-7, indicating a one-sided contest, considering that Bangladesh never chased excess off 322 runs to win a game. Even their highest team total in ODI history is 329-6.

But it was to see how they could cope up with modern power cricket when 300 above total became normal. The Tigers failed miserably, being all out for 264 in 49.3 overs.

However, Team Bangladesh could search motivation from their past record. Ahead of 2015 World Cup, they lost their both warm-up games and even ahead of tri-series tournament in Ireland in which they lifted the trophy as unbeaten champions, they lost their warm-up game to a second strong Ireland side.

Mushfiqur Rahim was the highest scorer for the side with 90 while Liton Das made 73.

With Tamim Iqbal being rested as a precaution of an injury sustained during the practice session on Monday, Soumya Sarkar and Liton Das opened the innings, in a bid to chase a gigantic target.

They started with a flurry of boundaries much to the delight of the Bangladeshi fans but as Indian pacers—Mohammed Shami and Jasprit Bumrah quickly adjusted their length, they have little to do with those two quality pacers.

Bumrah brought up double delight for India, taking out Soumya (25) and Shakib Al Hasan for naught in consecutive deliveries before Liton Das and Mushfiqur Rahim combined for a 120-run for the third wicket to hint that Bangladesh would go down after massive fighting.

But Indian spin trio—Yuzvendra Chahal, Kuldeep Yadav and Ravindra Jadeja took six wickets for 47 runs in a gem of spin bowling to dent Bangladesh’s any hope to torment India before losing the match.

Firstly Yuzvendra Chahal came up with double strike in consecutive deliveries, beating well-set Liton with flight and sent back Mohammad Mithun for 0 with sly googly. Liton’s 73 came off 90 deliveries with the help of 10 boundaries.

Sabbir Rahman failed to come up with terms to bolster his case for strong contender as No. 7 batsman as Ravindra Jadeja rattled his stump after he scored just 9. Mehidy Miraz (27) and Saifuddin (18) took the team past 250.

But the resistance came from KL Rahul and MS Dhoni. Dhoni smashed 77 ball-113, hammering eight fours and seven sixes while Rahul smote 12 fours and four sixes in his 99 ball-108.

Mustafizur made the breakthrough, dismissing Dhawan for 1 and Rohit after much struggle was sent back with 45 ball-19. Kohli also struggled but he quickly settled and unleashed some beautiful shots from the repertoire to cover the initial hiccup.

Saifuddin got Kohli after he scored 47 off 46 and left India further struggling 83-3. Given India’s middle order vulnerability, Bangladesh seemed to have in control.

KL Rahul, adamant to seal his spot as India’s long disputed No.4, refused to bog down. He got an inform MS Dhoni who carried his IPL form to quickly bring Bangladesh down to the earth.

They shared 164-run for the fifth wicket stand to tilt the match towards them. Later Hardik Pandya and Rivandra Jadeja hit some lusty blow to help India amass 79 runs in last five overs. They plundered 116 runs in last 10 overs in fact.