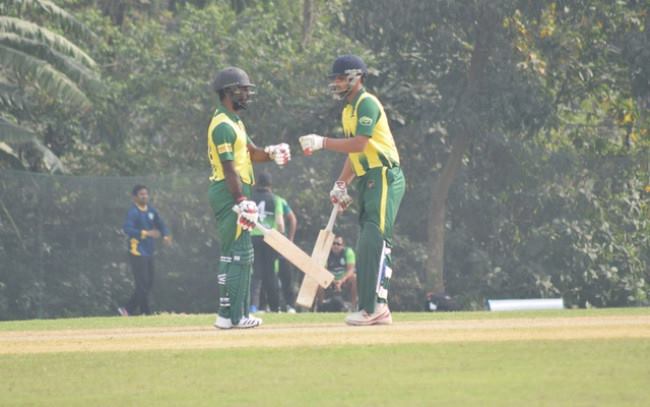 Their seventh victory in 10 games ensured their Super League spot as the fourth team after Abahani Limited, Legends of Rupganj and Prime Bank Cricket Club. Uttara was languishing at bottom table with four points in 10 games.

Being sent to bat first, Uttara were shot out for 160 in 46.4 overs, giving Prime Doleshwar to seal a comfortable victory. There was little doubt in Doleshwar’s victory but they made it hard to some extent by losing five wickets before cantering to the victory with 161-5 in 38.1 overs.

Prime Doleshwar lost opener Imrunuzzaman for eight while Saif Hassan also couldn’t convert his good start to big innings, being out on 26.

Taibur Rahman (4) thereafter was removed cheaply, leaving Doleshwar 57-3 after which Farhad Hossin and Marshall Ayub quelled the tension with 94-run partnership. Their partnership took the side on the verge of victory before they were removed in the space of seven runs. Farhad made 59 while Marshall scored 54.

Sheikh Jamal Dhanmondi Club kept up the hopes alive to move into the Super League phase of Dhaka Premier League following their five-wicket victory over BKSP in a low-scoring match at BKSP-4 ground.

Spinners duo Nasir Hossain and Elias Sunny claimed three wickets apiece as Sheikh Jamal bundled BKSP out for 161 in 42.1 overs after which their batsmen comfortably gunned down the total with 165-5 in 35.2 overs albeit a little hiccup.

Anustup Mojumdar, the Indian recruit of Sheikh Jamal was the highest scorer for the side with 43 while Elias Sunny also showed his prowess with batting, hitting 32.

Mojumdar and Sunny shared 44-run for the third wicket stand to steady the innings after Jamal was reduced to 43-2. Sunny struck five fours and one six in his run-a-ball-32. Mojumdar however batted cautiously to keep one side intact.

Sumon Khan trapped him leg-before to end his stubborn knock but skipper Nurul Hasan Sohan with 22 not out and Nasir Hossain with 20 ensured there would be no problem to reach the winning mark.

Sumon Khan was the most successful bowler for BKSP with 2-25.

Captain Akbar Ali held together BKSP innings after they were put into bat first. Akbar came into the crease when his side was struggling to get the rhythm. He was the highest scorer for the side with 43 and got support from Aminul Islam who made 29.

Akbar was removed as the fifth batsman with the side reeling to 114-5. Thereafter no batsman could take the onus, leaving BKSP to be skittled out for paltry total.

Jamal for the time being stays in sixth position with 10 points while BKSP with five points is in danger to be relegated.