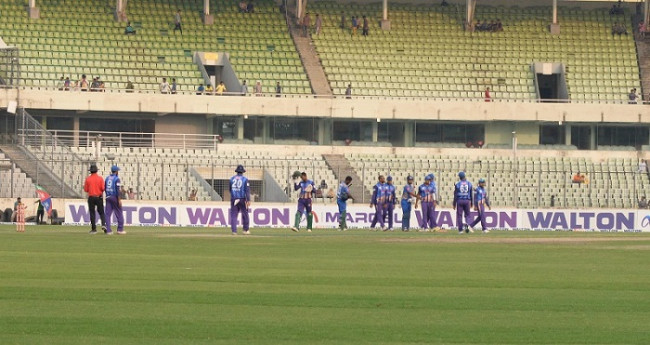 Dhaka Premier Division’s joint table toppers Abahani Limited and Legend of Rupganj take on each other at the Sher-e-Bangla National Stadium today.

Both the teams are placed at the top with 16 points and the winners will end of the first phase of the tournament at the top of the points table, before starting their campaign for the title in the super-league- played by top six teams of the league.

Prime Bank was also a major contender to end the group phase at the top but failed to do so largely due to the loss against Legends and that win looks to giving them confidence.

According to Legends batsman Shahriar Nafees they are taking that performance ahead of their game against Abahani, who are virtually playing the league with all the available leading player of the country.

‘’We defeated Prime Bank so nothing is impossible in cricket,’’ Shahriar told reporters on Saturday.

‘’After all it is cricket and will be played with bat and ball,’’ he said.

‘’You can make a lot of judgement in pen and paper but the team that will come up with a disciplined performance will end up as winner,’’ he said.

‘’Surely Abahani is very good side and you cannot ignore that,’’ he said.

Shahriar believe that their strength lies on team effort rather than anything else and credited the young coaching stuff for their contribution behind it.

‘’I think team effort played a big part. Everyone knows their role and fulfilling it beautifully,’’ he said.

‘’I think we reached so far due to team combination and discipline and we hope to carry that all through the tournament,’’ he said.

‘’We have a young coaching set-up headed by Aftab and they are guiding us well and everyone is trying to follow their direction,’’ he said.

Abahani head coach Khaled Mahmud said that they are aware of the big match and added that they feel the pressure despite it is played in near empty stadium.

‘’There is always pressure playing this league since its inception and though there is lesser crowd but the pressure is still there,’’ said Mahmud.

Nothing comes easy here and you cannot be guaranteed championship unless you play your last match,’’ he said.

According to Mahmud Legend is currently playing the best brand of cricket so far in the league and it implies they need to come up with their best cricket to beat them.

‘’They are certainly playing the best brand of cricket so we need to play to our potential to beat them,’’ he said.

‘’I still feel we are a very strong unit and if we can play to our potential we can certainly beat them,’’ he concluded.