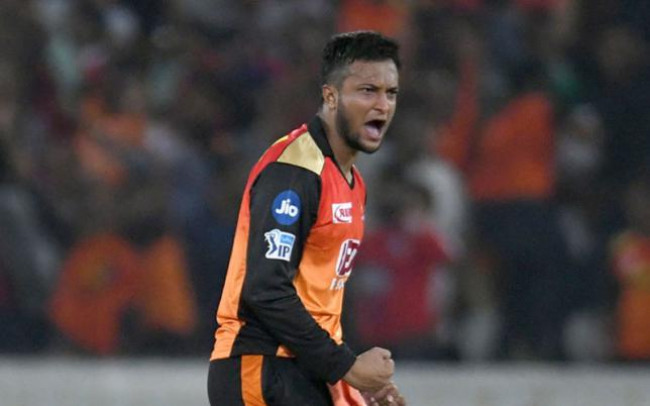 Bangladesh all-rounder Shakib al Hasan said on Thursday that he is disappointed for not making a place in the Sunrisers Hyderabad’s playing XI during the ongoing Indian Premier League.

Sunrisers dropped Shakib from their second game in the IPL after he provided a dismal performance in their opening match of the competition.

Regular skipper Kane Williamson returned to Hyderabad XI after he missed out the first match due to a shoulder injury.

Sakib was given the responsibility to defend 13 runs in the final over, but Gill (18) struck him two sixes in his second and fourth delivery to take Kolkata to 183-4.

Before that Eden Gardens witnessed a Russell storm, with the Caribbean all-rounder smashing four fours and same number of sixes in the 18th and 19th over to take 40 runs of those two overs.

‘’Obviously from personal point of view, it is disappointing,’’ Shakib told reporters on Thursday.

‘’But sometime you need to understand the situations of the team. The team we got, we got a formidable squad, 6-7-8 combination. All the overseas players are playing, they are performing really well,’’ he said.

‘’So I have to wait for my opportunities. When the time comes, I hope I can perform,’’ he said adding for the time being all he can do is pray that his team keeps their winning momentum intact.

‘’Only thing I can think of, hope we continue this performance and keep winning for orange army,’’ he added.

Sunrisers mentor VVS Laxman said that they feel sorry that they cannot accommodate proven campaigners like Shakib as they can field only four foreign cricketers in their playing line-up.

‘’Of course it feels bad. International cricketers, those who are match winner like Shakib, Kane Williamson…so we can only play four overseas players,’’ said Laxman.

‘’But one special thing about our team is, they all enjoy playing cricket, they all contribute to the team. Everyone wants to play and perform and feel proud about them,’’ he said adding they are well aware of Shakib’s worth.

‘’He[ Shakib] is very important cricketer for us. Not only us, he is one of the most valuable player for Bangladesh. It’s a privilege working with him,’’ he concluded.