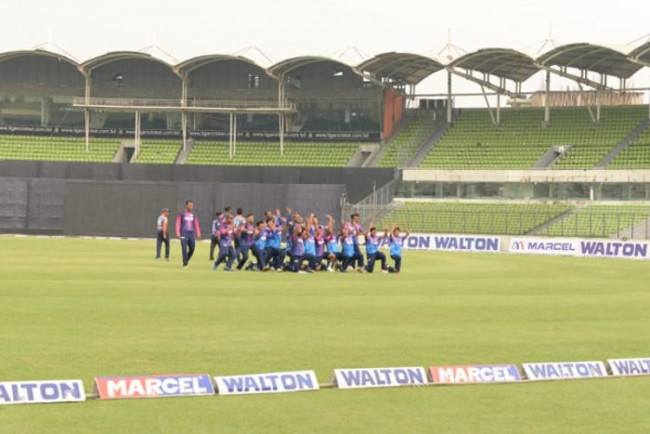 A high-scoring thriller, an upset and a thrilling tie marked an eventful day of the Dhaka Premier League (DPL) on Saturday. Prime Bank trumped the century an epic century of Fazle Mahmud and Mizanur Rahman to chase down 331 runs. Uttara sprung a surprise by beating Mohammedan while BKSP’s 16-year pacer, Tanzim Hasan Sakib, held Shinepukur for a thrilling tie from a potential victory.

Prime Bank Cricket Club showed an impeccable performance to chase down 331 runs in an utmost effortless way to keep their winning spree in the DPL. Fazle Mahmud and Mizanur Rahman hit tons in vain as Primer Bank recorded a five-wicket victory over Brothers Union in the big-scoring thriller at the Sher-e-Bangla National Cricket Stadium.

The victory propelled Prime Bank to the top spot of the point table but with 12 points from seven games, they are in the second spot, behind Abahani by net-run-rate.

Fazle Mahmud scored his list A career-best 149 not out and Mizaur made exactly 100 as Brothers Union racked up staggering 330-2 in their 50-over allocation. No one even made a century for Prime Bank, but still, riding on an effective team effort, they gunned down the target with seven balls to spare.

Prime Bank’s Indian recruit Abhimanyu Easwaran led the charge with 96 ball-90, hitting six fours and one six. Alok Kapali smashed six fours and three sixes in his 65 ball-82 not out to give the finishing touch.

Easwaran and Anamul Haque set up the platform with 75 off just 58 balls for the second wicket stand. Anamul was dismissed for 54 off 47. But Easwaran got ably support from Al-Amin who hit 47 ball-52, to keep the side in the hunt. Later Kapali made the chase a cake-walk. Sajedul Islam scalped 3-70 for Brothers Union.

Put into bat first, Brothers Union lost Junaid Siddique cheaply but recovered rapidly as Mizanur and Fazle Mahmud combined for a 193-run for the second wicket stand to pave the platform of a big total. Mizanur struck eight fours and five sixes before being dismissed for 100 off 109.

New sensational Yasir Ali then smashed a 37 ball-61 not out, clobbering six fours and three sixes to propel the side past 300. Fazle Mahmud’s unbeaten 149 off 147 was studded by 13 fours and five sixes.

But the effort eventually went in vain because of the superior team effort of Prime Bank.

Abdur Rashid and Asaduzzaman Payel were the wrecker-in-chief, claiming three wickets apiece to derail Mohammedan and scripted their fourth consecutive defeat in the DPL. Sajjad Hossain also came up with handy support with 2-27.

Nadif Chowdhury was the highest scorer for Mohammedan with 39 while Mohammad Ashraful made 28.

Tanzid and his fellow opener Asiful Islam Emon shared 85-run for the opening stand to lay the solid platform after which the victory looked imminent. Emon was dismissed for 37. Mohammedan got a glimmer of hope when they got the wicket of Jony Talukdar after a while. But Tanzid and skipper Mohimenul Khan shared further 54-run to dent their hope.

Mohimeul scored 22 before being dismissed, leaving Uttara 145-3. Tanzid, however, remained unfazed and left the ground, ensuring the victory of the side. His unbeaten 101 off 120 was designed by 10 fours and three sixes. Shahadat Hossain grabbed 2-35 for Mohammedan.

Shinepukur Cricket Club were made to settle for a tie after a dramatic final over against BKSP at Khan Shaheb Osman Ali Stadium.

Playing for his only second List A game, BKSP’s 16-year old pacer Tanzim Hasan Sakib held his nerve to defend 10 runs in the final over to prevent Shinepukur from what appeared to be an easy victory with set batsman Unmukt Chand in the crease.

Indian recruit Chand failed to score required two runs in the final delivery as he was baffled by Sakib’s bowling and only could manage one bye run before being run-out in an attempt to steal the unlikely second runs.

His run-out made the score level with 222-9 after BKSP amassed 222-8. Chand’s valiant effort, an 87 ball-74 with two fours and three sixes finally went in vain. Delicate

But Tanzim Hasan Sakib had the last laugh due to this match-defining bowling despite going wicket-less in the match. Hasan Murad was the top wicket-taker for BKSP with 3-41 while Abdul Kaiyum took 2-31.

Shinepukur openers Shadman Islam made 45 and Sabbir Hossain scored 36 as they shared 86-run to give the side a solid start in pursuit of 223. Unmukt Chand held together the innings after their dismissal but didn’t find enough support as BKSP bowlers made regular inroads to tie the match from the jaws of defeat.