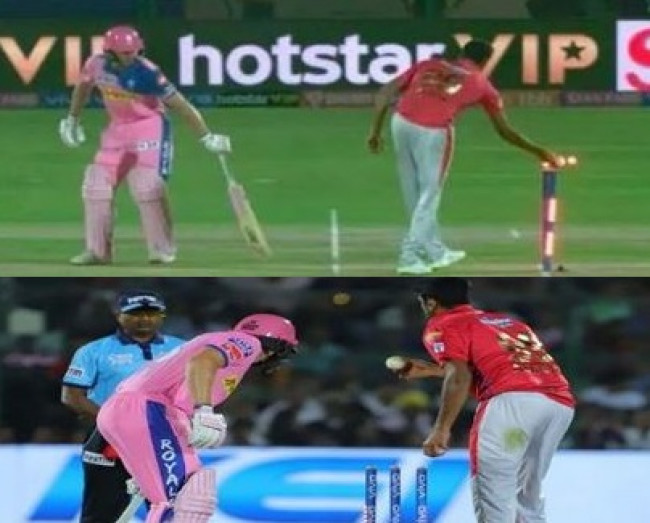 Kings XI Punjab skipper Ravichandran Ashwin took Indian Premier League by storm as through exploding controversy during their clash against Rajasthan Royals after he mankaded Jos Buttler at Jaipur on Monday.

The incident had a long impact on the outcome of the match as Punjab won by 14 runs despite being on the receiving end before the departure of Butler as Royals were well-placed at 105/1 after 12 overs with Buttler leading the charge with a half-century.

Ashwin coming to bowl his final over of the game, saw an opportunity off the fifth ball to mankad the batsman that seemed to have derailed their chase to a large extent.

Buttler, who had taken a few steps out of his crease, was eventually ruled out. The batsman was agitated and was involved in a heated argument with the bowler who appeared to say 'you are not in the crease and you've been upsetting my rhythm'.

The umpires referred the call to the third umpire, who ruled Buttler out. The mankad law was tweaked a bit at the end of 2017. Initially, a bowler was allowed to attempt a run out only before entering the delivery stride but now as per the new law, the bowler is allowed to run out the non-striker up to the instant at which they 'would be expected to deliver the ball'.

If the bowler fails in an attempt to run out the non-striker, the umpire shall call and signal Dead ball as soon as possible.

“No really argument to that (Mankading incident) and it's pretty instinctive. I actually didn't load and he left the crease. That's always been my take on it because it's my half of the crease. I was not even at the crease, he wasn't even looking at me and he just left the place,’’ Ashwin said in the post-match presentation.

“We ended on the right side of the coin, but I definitely think that those are game-changing moments,’’ he said.

Kings XI Punjab got their campaign in IPL 2019 off to a winning, and controversial, start as they defeated hosts Rajasthan Royals by 14 runs. The headlines of the match, however, will be dominated by R Ashwin mankading a well set Jos Buttler during the chase, and thus derailing Royals. They succumbed after the Englishman's dismissal and eventually fell short by 14 runs.