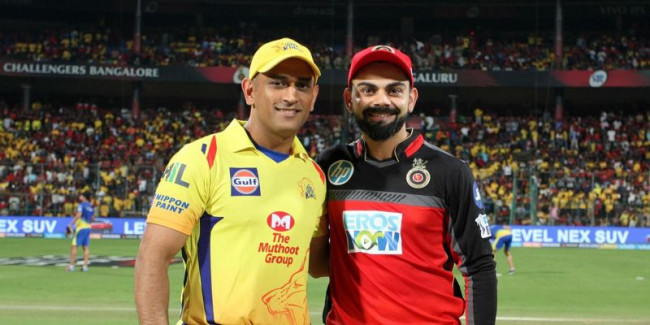 MS Dhoni’s side won 9 of their 14 league matches – this despite having to shift base to Pune, sailed straight to the final by winning the first playoff, and then turned in a dominant performance in the title clash to clinch their third IPL title.

The franchise has retained the bulk of the squad that did duty for them last season. They have given themselves a couple more options by acquiring the services of Mohit Sharma (former India pacer) and Ruturaj Gaikwad (Maharashtra opening batsman) in the IPL Player Auction 2019.

The title holders were dealt a lethal blow day prior to their opening match when South African pacer Lungi Ngidi was ruled out of the season with a side strain. It will be interesting to see if the team management replaces him with David Willey or if they tinker around with the line-up.

RCB had a disappointing season in 2018. The franchise won just 6 of their 14 league matches and finished sixth in the eight-team standings. Virat Kohli’s team won only 3 of their first 10 matches and were therefore always playing catch up. Heading into their last league match, they were still in with a chance of progressing to the Playoffs; but Rajasthan Royals emerged victors in that match and qualified as the fourth qualifier.

RCB have retained 15 players from their 2018 squad and acquired the services of nine more players at the IPL Player Auction 2019. Shimron Hetmyer, Shivam Dube and Heinrich Klaasen are among the exciting new signings. They will be handicapped at the start of the season with Marcus Stoinis and Nathan Coulter-Nile missing out the first few games because of international commitments. Kohli believes that it is hard to draw anything from Head-to-Head stats in a T20 game that's played with vastly different players. Stephen Fleming, an advocate for personal consistency, staunchly advocates the concept of recall value - the ability to draw from past experiences of playing an opponent.

"Recall does count," Fleming said on the eve of the game. "Being able to stand up to pressure situations and recall how you dealt with them in the past is a key component in a fast-moving game. Our players are still very skilful but that experience [of having played these games before] counts. I value that a lot. The methods in which you win or compete are very important if you can keep repeating them."

This contrast is at the very heart of CSK vs RCB. It is what adds flavour to the narrative and why the advertisement works in creating a heightened sense of expectation. Kohli's fire to Dhoni's ice. Of constant recalibration to continuity. Of faltering promise and sustained success.

As another season gets underway, those impassioned RCB fans hoping for an inversion in fortunes would love nothing more than to burst the great CSK bubble. RCB believe a bevvy of young players, the Dubes, the Hetmyers and the Naths, who carry no battle scars of previous heartbreaks, will be instrumental to the season.

"Every team that comes to Chennai has to be considered underdogs because CSK has done so well at home. MS knows exactly what he wants from his team in these conditions. We all have seen that and are aware of it," Kohli said. "It's very easy to be overawed by the support that CSK are going to get. In the IPL, people can get carried away by the support that a team like CSK gets at home but we have to focus on our game," he added, reiterating his stance from the advertisement.

"In the past when we have reached, where we had a chance to win titles, we've expected the game to go a certain way and not really gone there and created a situation where we end up winning that particular match. That has been the breakdown. Poor decision making in crunch situations. That's what we want to correct this season. It doesn't matter how we win or who we are playing against. It is simply keeping up an attitude where we don't give up at any stage and we want to find ways to win a game. If it looks ugly, it looks ugly. It doesn't matter."