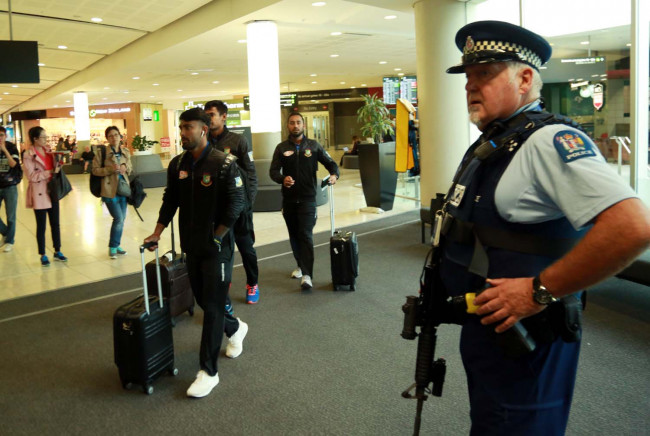 In the wake of the brutal terrorist attack in two mosques of Christchurch in New Zealand, BCB director Khaled Mahmud insisted on checking security ahead of visiting any country, no matter how peaceful it is.

Terming New Zealand incident an eye-opener, Mahmud insisted that this is high time for Bangladesh to talk about security issue much like what the Western countries demand to Bangladesh every time they visit here.

“From now we have to say for ourselves that we want the highest security for our team, whatever the peaceful country is,” Mahmud said here today as Bangladesh escaped narrowly from a terrorist attack in Christchurch.

“England, Australia or New Zealand came here with their whole security teams. They check our hotels, streets, roads etc. They check the route of buses, the directions everything. Even they visited each venue. I think Bangladesh should also do this. They are international teams, we are also the same. You can’t say safe in any place. If it happened on our own soil, then there is no certainty anywhere in the world,” he added.

In the brutal shootout carried out at two different mosques in Christchurch at least 49 people were killed while 40 others were injured that it prompted New Zealand Prime Minister Jacinda Ardern to term it a terrorist attack and one of New Zealand's darkest days.

The Bangladesh team was about to come out from the bus to arrive at the mosque when they witnessed a wounded woman fall in front of them. They were then cautioned by another woman not to enter the Mosque. They were later taken to the Hagley Oval stadium’s dressing room and thereafter escorted to the hotel with tight security.

“We should be aware as like as the other countries. Wherever the place is, England or Australia, our security forces will go first and will talk. You can see that our government also helps us a lot. Even, our government provided the highest level of the security previously when there raised an uncertainty of series. I think other country’s government should provide the same security. Bangladesh provides maximum security to the visitors.”

In the wake of the Christchurch incident, Mahmud believes checking the security of any country ahead of visiting it is imperative now. “I think we should send our security team before every visit… and check everything. I think we are being humble. But it's not actually like this. Checking security before their visit is the right decision,” he said.