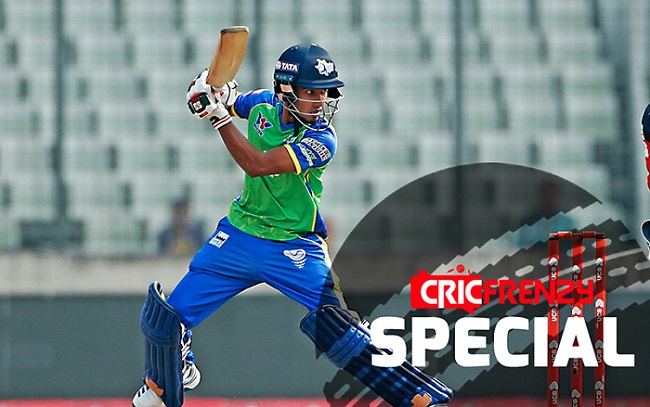 Afif Hossain, popular known as Dhruvo in the cricket fraternity, made his presence felt by his big-hitting capability but it was his bowling, with which he hogged limelight in the last season’s BPL. He claimed 5-21 on his debut BPL match, including the wicket of Chris Gayle. He thereafter made the cut in the Bangladesh’s T20 team but hardly justify his tag as an attacking batsman or as a bowler. Unlike others, he became stronger by the axe and proved in this BPL that he is growing as matured cricketer as the time progresses. Many believe his one and one work with his Sylhet Sixers teammate David Warner and coach Waqar Younus would pay a rich dividend at some point of his career. Cricfrenzy’s Muhammad Jubair has recently talked to youngster to unearth the facts of his cricketing life, his chemistry with Warner and Waqar.

Here are the excerpts of the interview...

Cricfrenzy (CF): What do you think about your performance?

Afif Hossain (AH): Actually, I have just focused on my batting. The performance wasn’t good in previous tournaments including National Cricket League (NCL). I have just tried to do well.

CF:  What about the partnership with Warner?

AH: I have played as I always play. Warner is a very good teammate. He gives me awesome supports. I just utilize the chances.

CF: Have you changed your batting style?

AH: I have worked with my style and try to increase few shots before BPL. Actually I have focused on power-hitting.

AH: If you want to make a big score during the Power-play, you should have to make some big shots. You can’t make a good score without power-hitting. I have worked with this and get success in the BPL.

CF: How the batting in top order this season helps you?

AH: It helps me a lot. I was with Titans on last BPL season. I had played at no. 3/4 spot.  This year I have played for Sylhet. Warner and Waqar sir kept their belief on me that I would bat in higher position of the batting order. This thing inspires me a lot.

CF: How it feels like to face off the pacers?

AH: I play as a top-order batsman. So, I am always prepared for facing fast bowlers. That’s it.

CF: Have you adjusted well?

AH: Yes, I have adjusted well. I have made 20-40 runs per innings. If I could play a big innings, I would have scored more runs. I'll work with it now.

CF: What about you fielding?

AH: It doesn't matter if I do well in batting or bowling, I feel no pressure during fielding. But I always try to concentrate on fielding.

CF: We have seen you standing on an important fielding position.

AH: Yes, I have been doing this since last years. I have got an important place of fielding in the A-team, HP-team.

CF: What have you learned from Warner?

AH: Young players can learn so many things from him (Warner). He is very professional.

AH: I have talked a lot with him during the practice session. He have suggested me many things.

AH: Warner suggested me to play according to my capability. He said, “Try to give your best. Follow your own way. Don’t listen to anyone. I will follow him and will give my best from next.