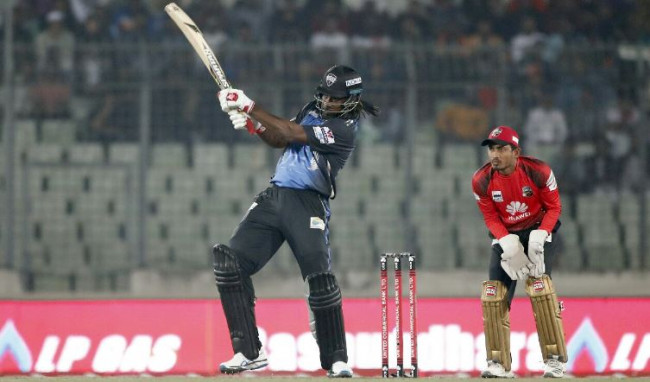 Rangpur Riders captain Mashrafe Bin Mortaza is looking forward a Chirs Gayle storm as his side would further give a shot at the Bangladesh Premier League (BPL) final when they take on Dhaka Dynamites, a team which gradually is getting its best back after a hiccup halfway through the tournament.

Before winning the last match of group phase and a victory in the Eliminator game against Chittagong Vikings, Dhaka lost five matches out of the six. If their domination against Chittagong in the last game is taken into consideration, they would look a team to beat.

Mashrafe probably sensed it after watching Dhaka hit back with full glory and therefore he wants more from Gayle, considering the game now turns out to be ‘do or die’ clash.

Gayle made the difference between the two teams when Rangpur crushed Dhaka Dynamites by nine wickets in the last year’s final game. Gayle smashed a 66 ball-146 not, the highest ever score in a T20 final game, including a record 18 sixes, to scythe down Dhaka.

Not only that innings of the tournament, but Gayle also got his mojo back in the play-off stage in the last year after a slow start. Rangpur were arguably a weaker side after the departure of AB de Villiers and Alex Hales while Chris Gayle remained just a shadow of his past though he did manage to score a half-century with two 40 plus score.

“We probably batted slowly in the first power play it’s not like we lost too many wickets. Just 36 runs in the first six overs is not enough in this format and that too despite not losing because every team want to encash the opening six overs in this format,’’ Mashrafe told reporters and indicated that now he is looking forward for the universe boss to deliver.

Riders never looked to get the start they would have liked and placing Rilee Rossouw down the order only indicated the defending champions were well aware they absence of Alex Hales and AB de Villers got over their head.

“We don’t have Hales and AB in our line-up so naturally we wanted to make sure we have some depth in our batting and so decided to demoted Rilee down the order while it was also the reason they opted not to chase,’’ said Mashrafe adding that he is not losing confidence from the universe boss.

“I always believe big players deliver on big occasions and there is no doubt Gayle is one of a kind in the entire world. I am sure he will deliver when it matters,’’ he added pointing his performance in the last edition where he raised his tempo in the semi-final and final to repay back the faith of the team management after a pretty dismal show in the group phase.

Dynamites coach Khaled Mahmud said that they are aware that Gayle is not scoring enough as he is aware this will make him more determined to blaze on the big occasion.

“Chris Gayle is not playing well, it is really scary. In the previous final, Gayle's ton put us to the winning score. He has no alternative. When he hit or defend it depends on his wish. We should not think about his batting individually,’’ said the coach.

“However, we are still making a plan for Chris and it is important to execute the plan. Moreover, they have lots of match winners. They have Riley Russouw who is the top run scorer of the tournament. I will say that he is a player who is capable to play in this condition and a game changer,’’ he added. The winner will take on Victorians in the final at the same venue on February 8.