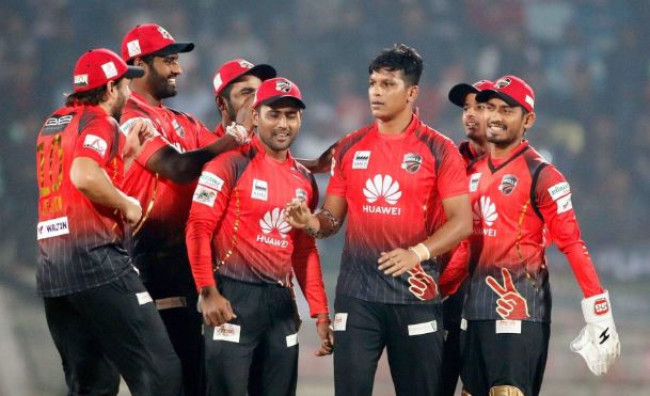 Opener Evin Lewis smashed an incredible 53 ball-71 not out as Comilla Victorians whacked Rangpur Riders past by eight wickets to seal a spot in the BPL final at the first attempt on Monday at the Sher-e-Bangla National Cricket Stadium in Dhaka.

The defending champions Rangpur Riders, however, will take on Dhaka Dynamites in Qaulifier-2 game on Wednesday to further give at a shot at the final.

Comilla bowlers’ tight bowling was instrumental in restricting Rangpur to a moderate 165 for five, a score that Lewis looked easier by his calculative aggression in a pitch not entirely benevolent for the batsmen.

Lewis’s innings was complemented by Anamul Haque Bijoy 31 ball-39 as Victorians moved into the final for the second time after 2015, overhauling the target with seven balls to spare.

The victory was particularly pleasing for Comilla given the fact that they lost by crushing nine wickets to Rangpur twice in the group phase. More frustrating was that on both occasions they failed to cross even 100 runs, being out on season lowest 63 and 71.

Lewis and Anamul shared 90 off 62 for the second wicket stand to take the side on the verge of the victory after Tamim Iqbal perished to a loose shot to be out for 17 off 14.

The Caribbean hard-hitter, whom Chris Gayle certified as the next ‘Universe Boss’, understood the nature of the pitch better than other players. He mostly relied on singles and doubles rather than playing big shots but when it came to his zone, he hadn’t had any hesitation to treat it disdainfully.

Anamul was also restrained but matched with the shot to shot with Lewis to make the task tougher for Rangpur.

As it looked they would take the side home without any fuss, pacer Shafiul Islam rattled Anamul’s wicket with a pinpoint yorker. Anamul’s knock was studded with two fours and as many sixes. But that was the last delight for a listless Rangpur who also was sloppy in fielding, allowing Lewis and Anamul milk easy singles.

Shamsur Rahman further punished them with 15 ball-34, two sixes and four fours, last which crossed the boundary rope through extra cover region to seal the deal emphatically. Lewis remained unbeaten on 71 off 53 with five fours and three sixes.

Rangpur were arguably a weaker side after the departure of AB de Villiers and Alex Hales while Chris Gayle was just a shadow of his past.

But they hoped for a Gayle-storm in the most crucial match for them after electing to bat first. And the decision backfired as they were left at tittering 34 for two after the first powerplay.

Gayle though kept his wicket intact, he was not the batsman to rip through the bowling as he was used to doing. When Mahedi Hasan had Gayle caught by Thisara Perera at long-off, Gayle was 46 off 44, hitting six fours and one six.

His knock was instrumental in slowing Rangpur’s innings but Rilee Rossouw and Benny Howell brought the side in contention with some powerful hits around the corner.

Rossouw smashed four fours and two sixes in his 31 ball-44 while Howell who gave the innings late impetus hammered an unbeaten 53 off 28 with three fours and five sixes.

Howell’s innings basically raised hope for Rangpur but Lewis’s serenity in the crease made the ultimate difference.