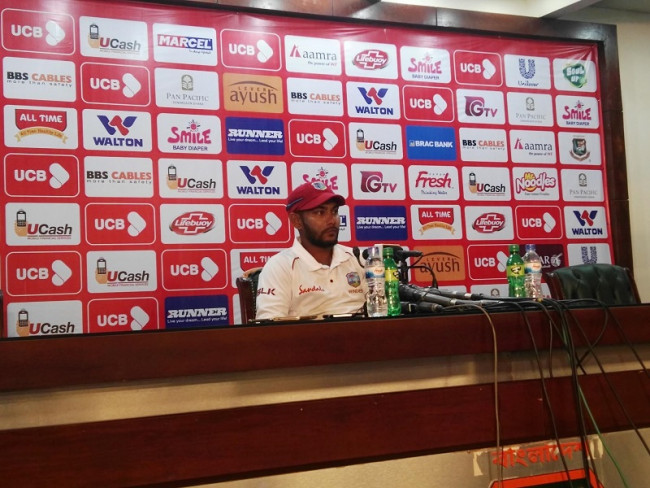 West Indies seemed to have misread the pitch or they were reluctant to go with new formula like Bangladesh. While the hosts completely ignored any pacer in their second Test line up, West Indies retained two pacers, bringing in Shermon Lewis in the place of banned Shannon Gabriel.

However they seemed to understand their mistakes soon and brought up spinners in just fourth over of the day after the pacers hardly got any assistance from the pitch in the first 30 minutes of the morning session when pitch remains absolute best for the pacers. Even they didn’t take the new ball after 80 overs, which raised another question what’s point of taking two pacers in the side.

It seemed not go well with Devendra Bishoo as he was reluctant to comment as to why the new ball was not taken.

“I am sorry I am not the captain,” said Bishoo. “I can’t say anything about it.”

Even he was reluctant to make comment on Bangladesh’s move to play without any pacer.

“I can’t say about them. I can only say about us. I think it is a better wicket than the previous one. We have to get them out as early as we can tomorrow. First innings is very important.”