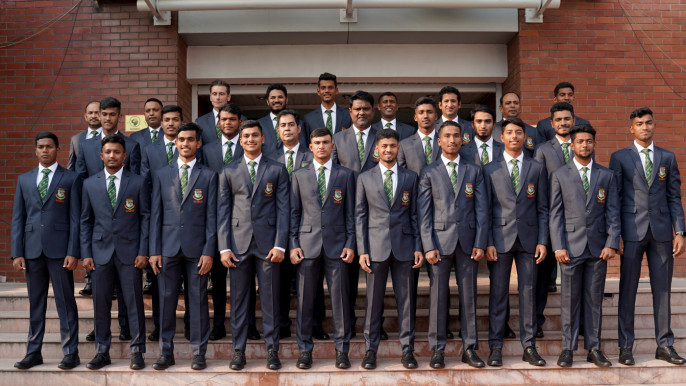 Bangladesh Under-19 team to leave for the United Arab Emirates on December 21 to compete in the Youth Asia Cup. Before departing the country, Captain Rakibul Hasan spoke to the press about their Asia Cup and World Cup voyage.

In preparation for the Asia Cup and World Cup, Bangladesh won the Triangular U19 series in India, defeating both the India A and India B youth teams.

Despite having less training for the two competitions, Rakibul feels optimistic in his team. The skipper was also a member of the U-19 team that won the World Cup in 2020.

"Last time we went we were well prepared. As a player I was new but this time old. I have tried to share the experience I had last time with the other players of the team. Besides, our team is also good. Hopefully, we will do well,” Rakibul said to media at BCB premises.

"Last time there was no such Covid situation. Just like we couldn't prepare this time because of Covid, the rest of the teams are like that. We have played a few series in the last 2-3 months and I don't think it's bad either. We have been well prepared and the camp we did before the Asia Cup has been good” he added.

Bangladesh U-19 cricket team head coach Naveed Newaz has stated that being the defending World Champion isn’t a pressure. Actually, it’s an advantage to take part as a title-holder in the upcoming extravaganza in West Indies.

“Not exactly (feeling pressure), because we have been with this group for almost one year now in and out with Covid and stuff like that but we have come to an understanding that this is the way we are going to play our cricket and last year being defending champion is an advantage for us, so we are prepare to use it to our advantage, not trying to get under pressure to sort of make it a disadvantage,” said head coach before fly off to the Caribbean from Dubai.

This is our time to show how we have improved as a team, says Nigar

Kohli on Nadal crying alongside Federer: 'Most beautiful sporting picture ever'

This is our time to show how we have improved as a team, says Nigar

Herath: UAE series will be a good preparation for T20 World Cup

Bavuma sees India tour as an opportunity to regain form

Moeen: I genuinely feel my over lost the game for us