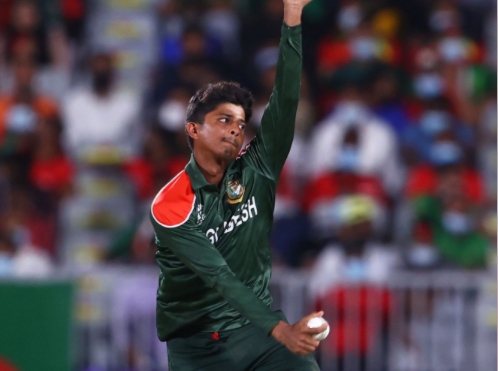 Bangladesh opener Tamim Iqbal has heaped praise on young all-rounder Mahedi Hasan for his excellent contribution with the ball in the important phase against Oman in the first round of the T20 World Cup.

Mahedi returned with the figure of 1-14 after bowling 4 overs with 12 dot balls, he did not offer any scope to the opponent to hit a boundary during his spell.

In the Nagad presents ‘The Tamim Iqbal show’ aired on Cricfrenzy, the ODI captain lauded Mahedi and claimed he was the best player of the match.

“Today everyone will talk about Shakib and Mustafiz. But to me, the man of the match is Mahedi Hasan. He is the only one who brought us back into the game. We rarely talk about the small contributions of the matches,” said Tamim.

“Mustafiz got four wickets, he has bowled brilliantly. Shakib has done great with batting and bowling. Everyone will acknowledge them. But today's match was changed by Mahedi. He is the man of the match for me,” he added.

“Mushfiqur is a batsman who will play 6-7 balls to settle down on the pitch. He will play singles in those balls. But when he settles down, I don't see any other batter in Bangladesh who can slog better than him. It's disappointing to see him at number eight,” he said.