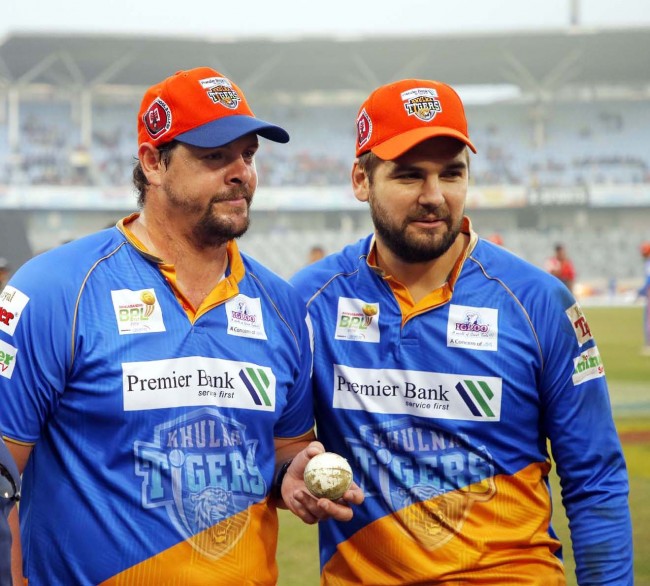 In the ongoing Bangabandhu Bangladesh Premier League (BBPL), the celebration that hogged the headline regularly was the celebration of Khulna Tigers South African recruit Rilee Rossouw.

The fans were entertained huge by the celebration of Rilee Rossouw, the most  inform batsman of Mushfiqur’s team.

Rossoue struck a 36 ball-71 not out to contribute alongside Frylinck to help Khulna win the match against Cumilla by 34 runs on Wednesday.

Apart from going strong in the tournament, Rossouw celebrated in unique way when he grabbed any good catch. The scene also happened in this match when he held on a tough catch of Sabbir Rahman at point diving to his jump.

Frylinck also the compatriot of Russouw, explained the batsman indeed emulated  Sadio Mane as the Senegalese footballer is his favourite player.

Terming him Joker he said: “Rilee [Rossouw] is probably the joker in our team. So good value and good fun. We play quite a bit of FIFA and that’s one of the footballers’ celebrations. I think it’s Sadio Mane’s celebration and Rilee supports him so he pulled that one up.”

However while everyone thought that the five-for against Cumilla was his first five-wicket haul in his career, Frylinck corrected the stat, saying that he also took a five-for in South African domestic T20 tournament.

“Just stick to the basics nice and simple and it was a good T20 wicket and we had to bash in good length early on. Obviously it started the worst way possible with five wides but I pulled it back in and the guys bowled really well so I was just the fortunate one.”