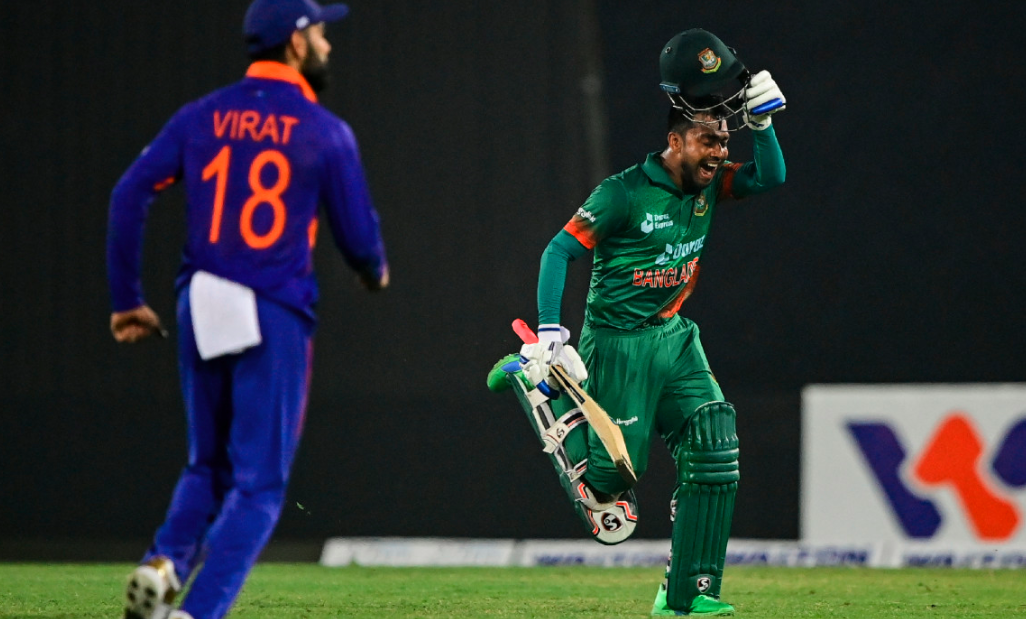 Bangladesh all-rounder Mehidy Hasan Miraz's heroic lead Bangladesh to beat India as his unbeaten 38 off 39 balls gave a thrilling one-wicket win in the first ODI on Sunday at the Sher-e-Bangla National Cricket Stadium in Mirpur.

Following a 48-run partnership between skipper Liton Das and Shakib Al Hasan, Bangladesh failed to seize the momentum as veterans Mushfiqur Rahim and Mahmudullah Riyad scored 18 off 45 and 14 off 35 balls, respectively, to slow Bangladesh down.

Both batters batted at a strike rate of 40 but were unable to sustain their innings, leaving the Tigers at 128-6 after 35 overs.

Left-handed batter Afif Hossain was dismissed for six, and tailenders Ebadot Hossain and Hasan Mahmud were both dismissed for nought, leaving only Miraz to save the Tigers and that he did as the right-handed batter hit four fours and two sixes in his unbeaten 39-ball 38 runs and stitched together a 51-run last-wicket stand with Mustafizur Rahman to lead Bangladesh to victory.

Earlier, Bangladesh ace-allrounder Shakib al Hasan and Ebadot Hossain shared nine wickets to restrict the visitors to a below-par total, which is also their second low score against Bangladesh.

India found themselves in a spot of bother after Bangladesh invited the visitors to bat first as they lost opener Shikhar Dhawan early as Miraz castled the batter when attempting a reverse sweep.

Then, Shakib axed captain Rohit Sharma and then returned Virat Kohli in the same over to give Bangladesh a stunning start to slumped India to 49-3.

KL Rahul and Washington Sundar came together at 92 for 4 and pushed the score past 150.

The southpaw picked up two consecutive wickets in 34th over to complete his fifer. In middle, he also dismissed Washington Sundar for 19 runs.

Shakib grabbed five crucial wickets and finished with a figure of 5 leaking 36 runs with two maidens in his 10 overs.