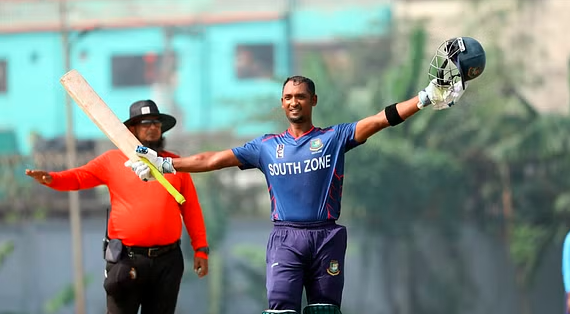 In the other match, North Zone defeated East Zone by 61 runs at BKSP, ground 3, thanks to Fazle Mahmud's 90 and Ripon Mondol's 2 for 18.

South Zone lost two wickets early in their innings before Mohammad Naim's 63, which came during a 99-run third-wicket stand with Naeem Islam, stabilized the innings.

Naeem, who went on to hit his 29th first-class century with a 106-ball 102 that included 12 fours and a six, shared a 140-run fourth-wicket stand with Nasir Hossain.

Nasir hit an 87-ball 75 before falling in the final over as South Zone finished with a total of 282 for 5.

In response, Central Zone lost wickets at regular intervals, with the top-order of Soumya Sarkar, Najmul Hossain, and Mominul Haque all failing to make an impact.

After North Zone were sent in to bat, openers Liton Kumar Das (4) and Tanzid Hasan (18) Tamim fell in quick succession. Ebadot Hossain picked up Shahadat Hossain Dipu leg-before for one to give East Zone the upper hand.

North Zone were left reeling at 101 for 6 after Mahmudullah Riyad (9), Akbar Ali (13) and Shamim Hossain (5) failed to find form but Fazle Rabbi and Mohammad Saifuddin strung together a 95-run stand for the seventh wicket to get them to a fighting score.

Fazle finished with a 126-ball 90 and Saifuddin contributed with a 58-ball 44 in the final over.

Tamim appeared particularly displeased with his dismissal, claiming the ball had struck his shoulders on the way to the wicket-keeper rather than the bat as he walked away.

Mahmudul Hasan Joy batted at one end for 44 runs with Afif Hossain (26) before joining Yasir Ali for a 56-run stand.

Joy succumbed to Shamim Hossain after a 100-ball 47 and once Yasir departed to Shamim in the 41st over after a 51-ball 41, East Zone's chase fell away and they were eventually bowled out for 155 all out.