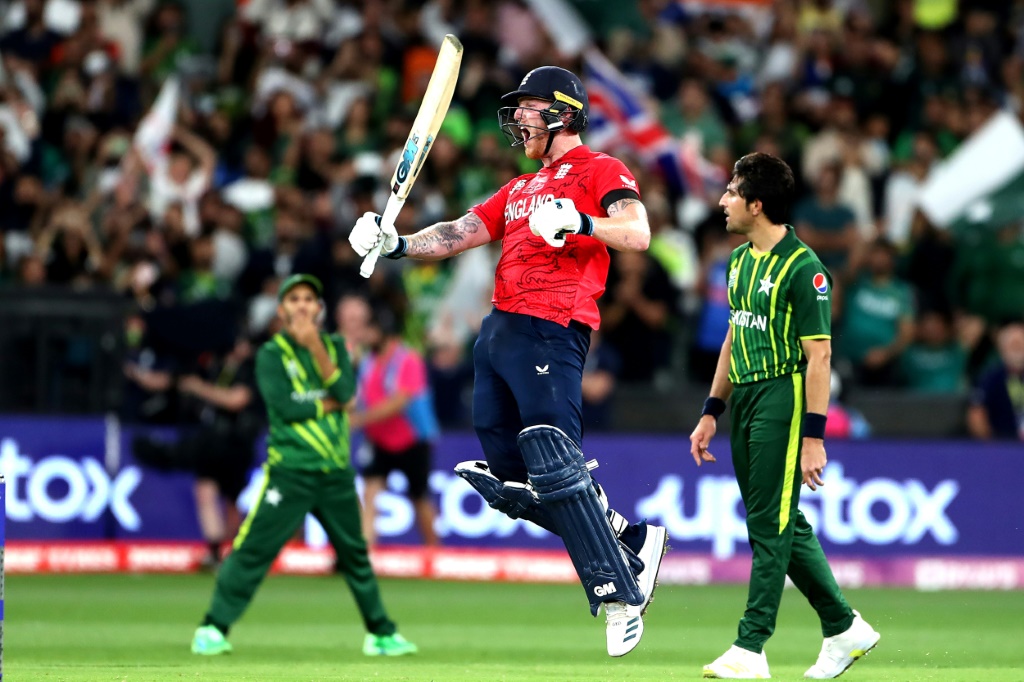 Ben Stokes started the T20 World Cup with his place in the England team questioned but he held his nerve in a pulsating final in Melbourne on Sunday to lead the side to glory.

Stokes chose the grand occasion in front of 80,000 baying fans at the Melbourne Cricket Ground to score his maiden Twenty20 international fifty and take England past Pakistan's 137-8 to win by five wickets with six balls to spare.

"Pretty good evening," said Stokes. "Representing your country in World Cups is amazing. It has been a good one."

Six years ago he had been given the task of bowling the last six balls with West Indies needing 19 to win, only for Carlos Brathwaite to smash four successive sixes to give the men from the Caribbean their second title.

That chastening experience may have destroyed a lesser player but not Stokes, who learned from it and now saves his best for those pressure-cooker moments.

"That man again. Ben Stokes is there at the end," said England captain Jos Buttler.

"He is the ultimate competitor in anything he does and has the experience to bank on as well. He timed it perfectly."

The charismatic 31-year-old entered cricket folklore with his exploits in the final of the 50-over World Cup at Lord's against New Zealand three years ago, which ended with a dramatic super over.

Not content with that, just weeks later he made a scarcely believable match-winning 135 not out in England's one-wicket win over Australia in the third Test at Headingley after they had been skittled for 67 in their first innings.

He was given the Test captaincy earlier this year, replacing his friend Joe Root and immediately turned England into an attacking, winning machine, celebrating six victories in seven Tests against New Zealand, India and South Africa.

An obvious natural talent, Stokes came under the wing of northeast county Durham and was soon rising through England's youth ranks, where he first met Root.

He made his Durham debut at 17 and his Test bow came during the second match of the 2013/14 Ashes series in Australia, which England lost 5-0.

In the following game he provided England with a rare highlight in a miserable series by hitting a defiant 120, his maiden Test century, in Perth.

Stokes scored England's fastest Test double century, off just 163 balls, during his 258 against South Africa at Cape Town in 2016.

He returned his Test-best bowling figures of 6-22 against the West Indies in September 2017 but his career was put on hold following a fracas outside a nightclub that same month.

That led to a charge of affray and although he was eventually found not guilty in court, he missed the 2017/18 Ashes.

Having taken on leading the Test side, Stokes retired from the 50-over game earlier this year, the rigours of playing all three formats too much for his aching, injury-prone body.

Buttler and England will be hoping he sticks around the Twenty20 set-up for a while longer yet.