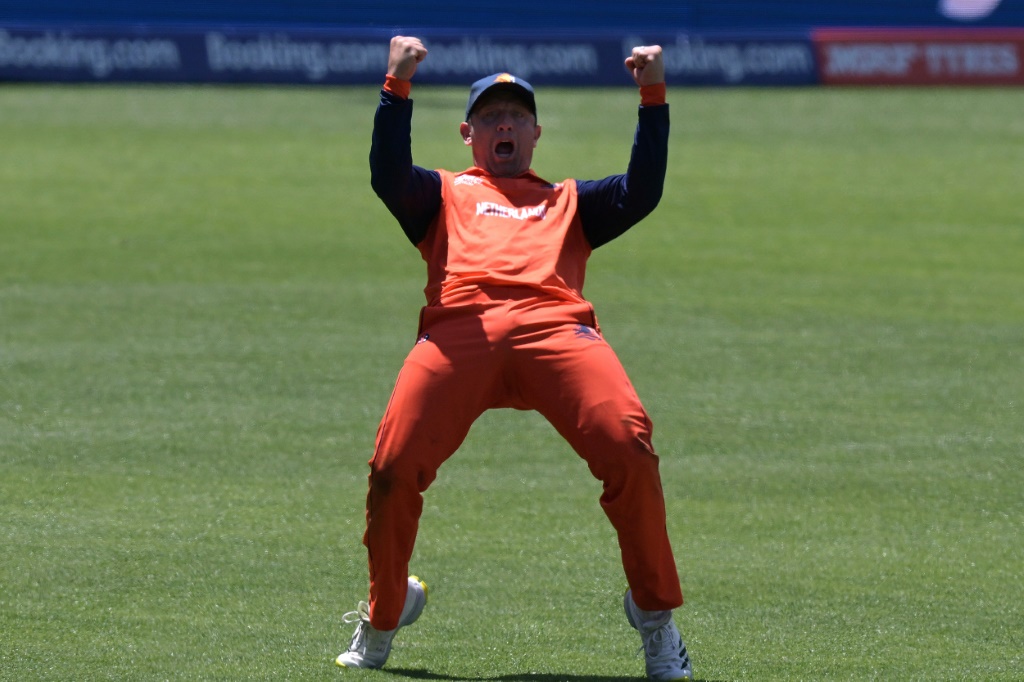 The Twenty20 World Cup in Australia has produced a series of shocks and the so-called minnows warn there are going to be more at future tournaments.

The last in a string of stunning upsets came on Sunday and was arguably the biggest of them all.

Scott Edwards' Netherlands knocked South Africa out of the World Cup at the Adelaide Oval with a surprise 13-run victory on the final day of the Super 12.

Coupled with wins for Pakistan and India over Bangladesh and Zimbabwe respectively, the Dutch will get direct entry into the expanded 2024 World Cup in the West Indies and United States.

Ireland, with wins over two-time champions the West Indies and England, were also giant-killers. As were Zimbabwe, who defeated Pakistan.

The first match of the tournament was a taste of things to come when Namibia thrashed Asian champions Sri Lanka by 55 runs.

Speaking on the eve of their match against the Proteas, South African-born Dutch bowler Roelof van der Merwe said these were no flukes.

"You look at the different formats and then you look at T20 cricket, and the shorter the format is, the closer the teams are," he said.

"Ten years ago there would have been one (upset) a tournament.

"You're seeing it more and more happen now. Teams are getting more clued up in how they want to prepare and what needs to be done in winning games.

"That's definitely something that's evolved in the last 10 years or so. Teams are getting closer to the guys at the top.

"It's good for cricket."

"Irrespective of what happens next, the Netherlands, Zimbabwe, Ireland, even Namibia and Scotland have demanded more opportunities in T20 cricket," he wrote on Twitter.

"This World Cup should lead to a greater democratisation of our game."

The International Cricket Council, the sport's ruling body, is keen to push the game's growth beyond traditional cricketing countries.

But the leading nations are often so busy playing each other that they have no time for the supposed minnows.

Series against lower-ranked sides do not bring the money in like a blockbuster India versus England one would.

The smaller nations often end up playing against each other, except when they get their chance at global tournaments such as a World Cup.

"The better idea would be for the 'A' teams of India or Australia or England to go and play these countries," senior Indian sports journalist R. Kaushik told AFP.

He agrees that the T20 format lends itself to shocks, but added: "Also these are indications that cricket in these countries is moving in the right direction."

Ireland skipper Andrew Balbirnie bristled at the notion that their wins over the West Indies and pre-tournament favourites England were upsets at all.

"We might not be recognised because we don't play as often as other teams on the big stage or in front of the cameras as often," he said.

"But I think these tournaments consistently show that teams outside the big six or seven are very good cricket teams."

Van der Merwe and Balbirnie said that the proliferation of T20 leagues around the world gave their players the opportunity to play at a high level all year round.

"So a lot of players are playing T20 cricket all around the world and getting experiences and exposure and learning new things," said the Irishman.

Future World Cups are likely to see more upsets, experts and players say, which in turn could fuel the growth of the game in those countries.

After the United States and West Indies co-host the 2024 T20 World Cup, the 2027 50-over showpiece will be jointly staged by Namibia, South Africa and Zimbabwe.

"I think it's a good confidence-booster and very good for Dutch cricket, so hopefully we can take advantage of it," Glover said.