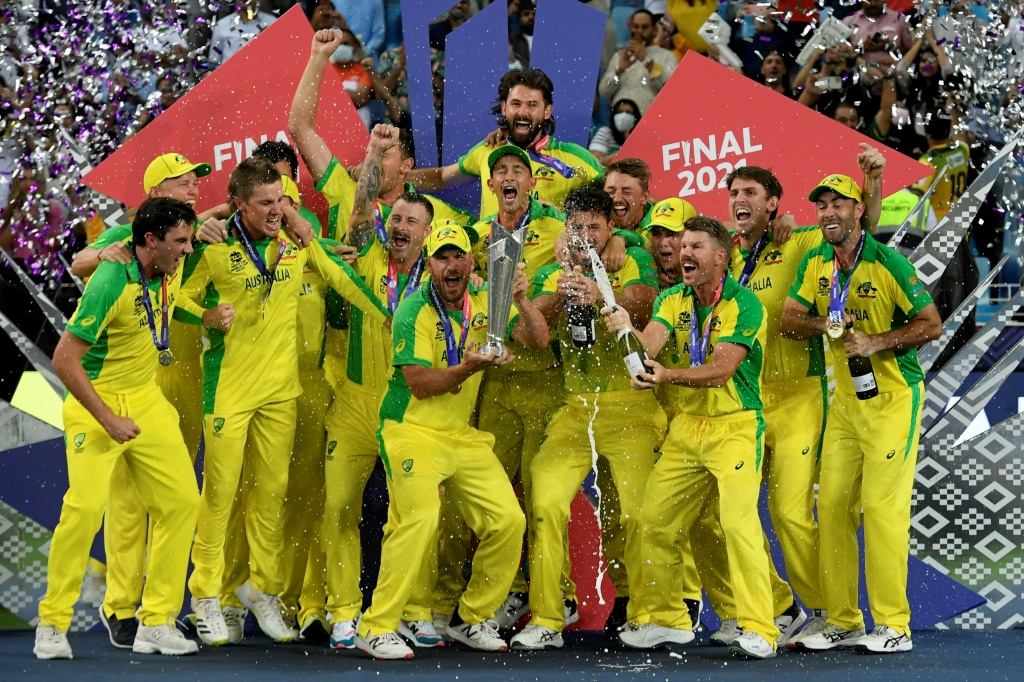 Australia have a golden opportunity to create history and become the first back-to-back Twenty20 world champions, but they face a formidable challenge led by India and England.

Aaron Finch's men enjoy the advantage of being the only winners of cricket's shortest format to have a crack at defending the title on home territory since the T20 World Cup started in 2007.

With a star-studded line-up spearheaded by David Warner, Pat Cummins and Glenn Maxwell, the Australians also boast all but one of the team that won the tournament last year in the UAE.

Finch, who recently stood down as one-day skipper to focus on T20s, suggested they will be all guns blazing in defence of the trophy.

"If in doubt, be overly aggressive. That is how we want to play," he said.

"At times that is going to come with high risk and high reward. At times it comes with no reward. That is just a part of T20."

The tournament's eighth edition begins on Sunday with Sri Lanka facing Namibia and UAE against Netherlands in a first qualifying round at Geelong, one of seven venues being used for the 45 matches.

Games will also be held in Adelaide, Brisbane, Hobart, Perth and Sydney, with the final on November 13 under lights at the cavernous Melbourne Cricket Ground.

The top nations join on October 22 when Australia open their defence against Kane Williamson's New Zealand in Sydney -- a repeat of the 2021 final in Dubai where Mitchell Marsh's unbeaten 77 powered them to an eight-wicket win and maiden crown.

Despite a couple of key absences India and England are the favourites along with Australia.

England face fast-improving Afghanistan in Perth for their opener on October 22 but will be missing star batsman Johnny Bairstow after he suffered a serious leg injury in a "freak accident" on the golf course.

A blockbuster clash follows 24 hours later in Melbourne when India take on arch-rivals and 2009 champions Pakistan, with more than 90,000 fans expected.

India suffered a huge blow last week when pace spearhead Jasprit Bumrah was ruled out of the World Cup with a back injury, further depleting the stocks of a side that has lacked steam in the final overs of the T20 format.

All-rounder Ravindra Jadeja is also absent with a knee problem.

While Rohit Sharma's side are ranked number one, they haven't lifted the T20 trophy since 2007 and failed to reach the semi-finals last year.

"Areas of concerns, we have to look at our bowling, what more options we can find in the powerplay, middle and death," said swashbuckling opener Sharma, who along with run machine Virat Kohli will be key to their chances.

"It will be challenging and we need to find answers, still working towards that."

World number two England are also a big threat for a first title since 2010 and beat Australia in a warm-up match on Sunday.

They are in Australia on the back of a 4-3 triumph in Pakistan, a series in which captain Jos Buttler attended but played no part as he recovered from a calf injury.

He is though fit for the World Cup and insisted not playing had its benefits.

"I've learned lots listening to the group and watching the way they go about things, watching without as much emotion as when you are involved and thinking about what you will do at certain times," he told reporters.

The West Indies are the only two-time champions -- in 2012 and 2016 -- but in a shock failed to automatically qualify for the Super 12 stage because they were outside the top-eight-ranked ICC teams at the time.

It means they play the first round of the 16-nation tournament despite now being ranked seven.

Nicholas Pooran captains an inexperienced side after Andre Russell was overlooked and a slew of veterans called time on their international careers.

They are paired with Scotland, Ireland and Zimbabwe and kick off against the Scots on October 17.

Recently crowned Asian champions Sri Lanka are in the same boat despite now being ranked eight and are grouped with Namibia, Netherlands and UAE in the preliminaries.

The top two from each group join the Super 12 nations -- England, New Zealand, Australia and Afghanistan in Group 1; India, Pakistan, South Africa and Bangladesh in Group 2.