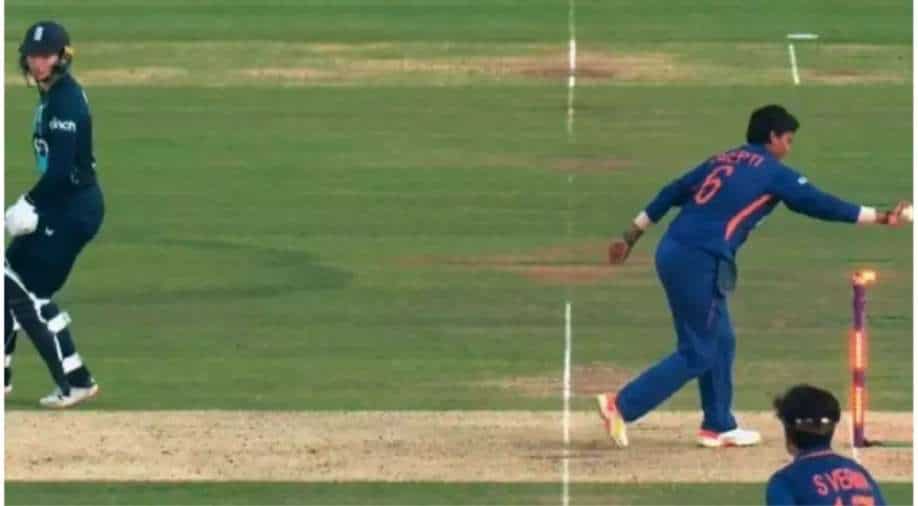 India's Deepti Sharma on Monday said the team repeatedly warned England tailender Charlie Dean for backing up at the non-striker's end before she controversially ran Dean out in a one-day international.

The rare mode of dismissal, named after Indian all-rounder Vinoo Mankad who ran out Australia batsman Bill Brown backing up in a 1948 Sydney Test, was last week ruled legitimate by the International Cricket Council.

But Deepti's run-out of Dean, who broke into tears after being dismissed on 47 as England fell short of their 170-run target at the weekend, left the cricket world divided on the tactic, which was long considered against the spirit of the sport.

"You surely don't train all your lives to win a game using that tactic... and I know batters should train to stay behind the line but it stinks seeing a game won like that," former England men's captain Michael Vaughan tweeted.

But Deepti, whose team swept the series 3-0, said they had done nothing wrong.

"That was our plan because she was repeatedly doing it and we had warned them too," Deepti, an off-spinner, told reporters on the team's arrival in Kolkata.

"We had also informed the umpires. But still she was right there so there wasn't much we could do. We did everything according to the rules and guidelines."

Deepti won support from Indian cricketers and pundits, with India skipper Harmanpreet Kaur saying: "I don't think it was any crime."

The Marylebone Cricket Club (MCC), the custodians of the sport's laws, reiterated the dismissal was within the rules of the game.

"MCC's message to non-strikers continues to be to remain in their ground until they have seen the ball leave the bowler's hand. Then dismissals, such as the one seen yesterday, cannot happen," it said in a statement.

"Whilst yesterday was indeed an unusual end to an exciting match, it was properly officiated and should not be considered as anything more."

"How about awarding that wicket to the bowler for 'presence of mind' under immense pressure and of course knowing the social stigma that he/she would have to deal with post doing it," he wrote on Twitter.

Tags: India, England ,
Up Next