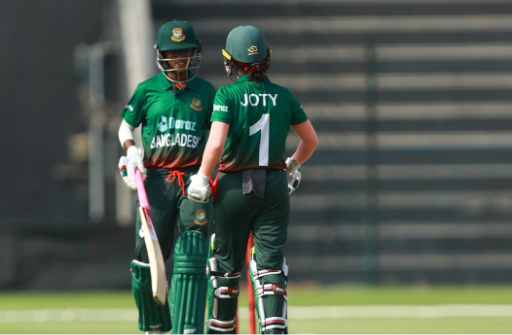 The six-wicket win over Scotland two days back had already taken Bangladesh to the top of Group A in the Qualifier.

After opting to bat first, Bangladesh lost Shamima Sultana cheaply, but the pair of Murshida Khatun and Nigar Sultana put on an unbeaten 138-run partnership, each bringing up their individual half-centuries.

The duo helped Bangladesh to 158/1 in 20 overs, their second-highest total in women's T20Is after the record-breaking 255/2 they made against Maldives in 2019.

In response, USA were reduced to 12/3 in the fifth over, losing three batters for a combined total of one run. However, skipper Sindhu Sriharsha and Lisa Ramjit fought back in a resilient stand for USA.

The duo remained unbeaten until the end, helping USA cross 100 for the sixth time in women's T20Is. They got to 103/3, falling short by 55 runs as Bangladesh made a clean sweep in Group A.