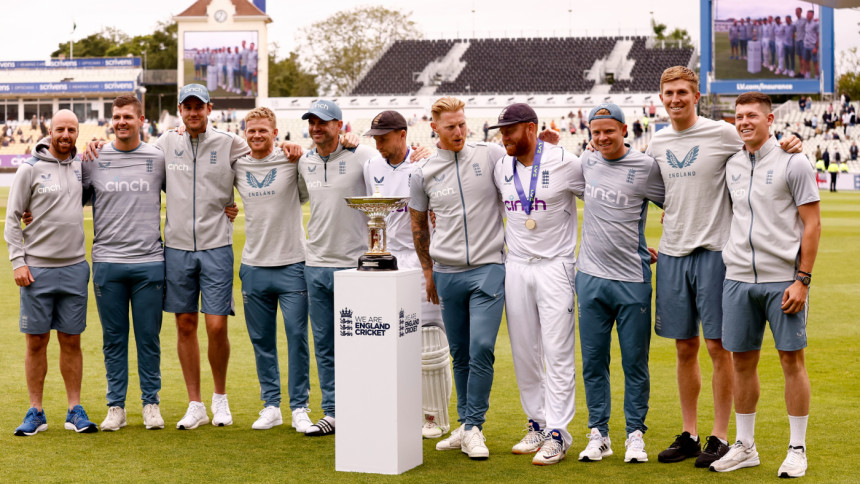 England are out to rewrite how Test cricket is played in the country, skipper Ben Stokes said after leading the side to a memorable seven-wicket victory in the fifth Test against India on Tuesday.

England rode unbeaten hundreds from Joe Root and Jonny Bairstow to pull off a record chase of 378 with two sessions to spare at Edgbaston for a thrilling series-levelling victory.

It follows their home win against New Zealand when they chased down targets of 277, 299 and 296 to blank the world champions 3-0.

"We're trying to rewrite how test cricket is being played in England," Stokes said of the team's new approach since he assumed captaincy and Brendon McCullum took over as the head coach.

"All the plans we've put together in the last 4-5 weeks we're going to try and carry forward.

"We know that we want to give some new life to test cricket. The support we received has been fantastic in the short time that we've been around.

"Inspiring the next generation is what we want to do. We want to bring in new fans and want to leave a mark on test cricket."

Few expected England to win so easily after conceding a first innings lead of 132 and set a target they had never been able to achieve.

Alex Lees and Zak Crawley got them off to a flyer with a rapid century stand.

Even after they lost three quick wickets, centurions Joe Root and Jonny Bairstow continued to play their shots.

Stokes said having clarity about individual roles was key to their stunning success.

"When you have clarity like we do at the moment in the dressing room, it makes totals like that and just the game itself a lot easier.

"(The target of 378) five-six weeks ago would have been scary, but it was good," said the all-rounder.

He quoted team mate Jack Leach to articulate the new team philosophy: "Sometimes, teams will be better than us, but no one will be braver than us, quote by Jack Leach."

Tags: England, India, Test,
Up Next