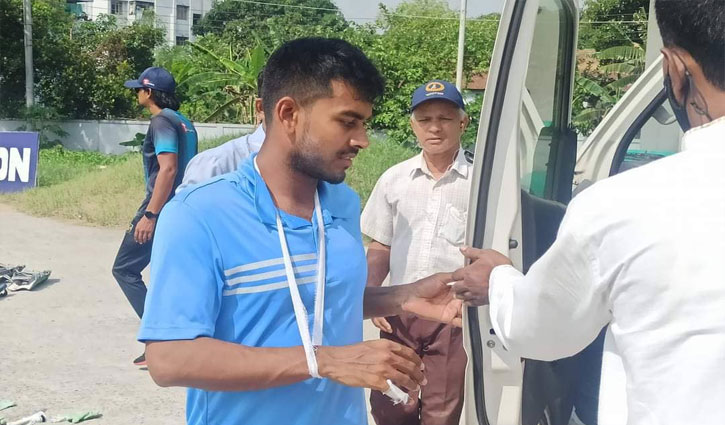 All-rounder Mehidy Hasan Miraz has been ruled out of the first Test against Sri Lanka after injuring his right hand's tiny finger during a Dhaka Premier League match. The selectors have yet to name a replacement, but the next in line, Nayeem Hasan, could be a good match.

Mehidy was injured when he dropped a catch in the deep during the Sheikh Jamal Dhanmondi Club-Prime Bank Cricket Club match. He writhed in pain and was carried off the field right away.

However, the BCB revealed the Test squad shortly after, which included Mehidy.

Minhajul Abedin, the chief selector at the time, had stated that the off-spinner would be fine, but the depth of the injury was only discovered after he got a scan in Dhaka.

Mushfiqur Rahim, who played for Mehidy's squad, Sheikh Jamal Dhanmondi Club, was also injured during the same match. Mushfiqur, on the other hand, has recovered sufficiently.

Bangladesh will be without Taskin Ahmed for the forthcoming Test series against Sri Lanka because he hasn't healed from a shoulder injury he sustained in South Africa. It reworked the pace attack, and without Mehidy, the spin attack will suffer in potentially slow, low conditions.