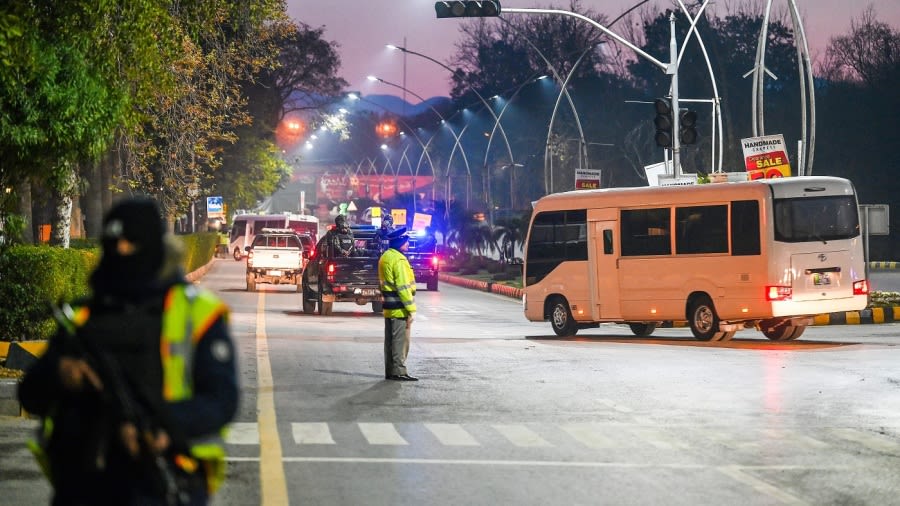 Captain Pat Cummins said the tight security surrounding his team was "comforting" and would not be a distraction after Australia's cricketers touched down in Pakistan for the first time in  24 years on Sunday.

Australia flew into Pakistan to be greeted by high-level security normally reserved for heads of state, with hundreds of armed police guarding the airport and the route to the team hotel in Islamabad.

"It's comforting. We are really lucky to be surrounded by so many professionals," said Cummins of the high-security presence.

"Absolutely feel incredibly safe. Lots of security, straight off the plane and straight to the hotel."

Australia will isolate themselves in their rooms for 24 hours while Covid tests are carried out before practising on Monday ahead of the first match in a three-Test series beginning in Rawalpindi on Friday.

The Australians will also play three one-day internationals and one Twenty20.

"We will be pretty much confined to the hotel but we have travelled to India and places like that a lot where you probably don't leave the hotel too much, so we are used to it," said Cummins.

"There are no distractions other than the cricket."

Pakistan have struggled to attract touring sides since a fatal terror attack on the Sri Lanka team bus in Lahore in 2009.

Having been forced to play their home games abroad -- mostly in the United Arab Emirates -- Pakistan appeared to have reassured international cricket authorities last year with both New Zealand and England scheduled to tour.

But the Black Caps hastily departed in September just minutes before their first match was due to start, citing security fears, and England postponed tours by both their men's and women's teams soon after.

Cricket Australia conducted a thorough assessment before clearing the tour -- a factor Cummins said was important.

"That (security) was one of the big factors that we wanted to be really thorough on before arriving here.

"There are lots of things going around which might be different, which we are not used to, but we know that's been taken care of and we can really enjoy our first tour here in 24 years."

Cummins admitted the gradual return of international cricket to Pakistan has changed attitudes to visiting the country.

"We always know that Pakistan is an incredible cricket nation," said Cummins who led Australia to 4-0 Ashes win in his first assignment as captain.

"We feel lucky that we get to come back here after a whole generation didn't get that opportunity to come and play Test or any cricket here."