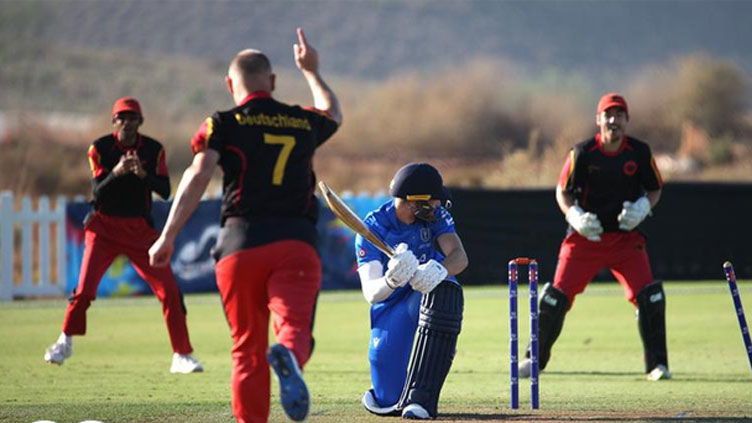 When Steven Knox first took charge of the German national cricket team in 2014, the idea that they could have qualified for a World Cup would have been absurd.

"We played a tournament in England that year and we were pretty hopeless. We've improved dramatically since then," the Germany coach and former Scotland international tells AFP.

Now, Germany are just a few games away from a place at the Twenty20 World Cup in Australia later this year.

The ICC associate member finished second in their European Qualifier in 2021, earning a place at the Global Qualifier in Oman, where they face the likes of Bahrain, Ireland and the UAE.

Rank outsiders Germany have never played at this level before, but Knox is cautiously optimistic, noting that they need just three wins to earn a berth to the World Cup.

"I'm not going to say it's impossible. It's absolutely not impossible. But we would need to play out of our skins and meet a couple of teams on their off days," the 48-year-old says cheerfully.

In his eight years as coach, Knox has seen cricket boom in popularity in Germany, driven in part by a rise in immigration from cricketing countries such as Afghanistan.

That has also helped the national team to strengthen, and Cricket Germany CEO Brian Mantle talks excitedly about the talent in the current squad.

"We've had a lot of players move to Germany who have a very high standard of cricket," he tells AFP.

Left-arm spinner Rasul Ahmadi arrived in Germany as a refugee after learning to play on the streets of Kabul, while 22-year-old South African born all-rounder Justin Broad has been playing for Surrey's second XI in England.

"Our strength and conditioning coach is also called Kieran Anderson, so we've got our very own Broad and Anderson," jokes Mantle, in a reference to England's veteran superstar strike bowlers.

Fitness coach Anderson has played a particularly important role in Germany's preparation, with many of the players unable to play or forced to train irregularly in the build-up to the tournament.

"It's winter so there have been some restrictions on training and there is not a lot of infrastructure. We are focusing on fitness," explains team captain Venkatraman Ganesan.

Lack of facilities remains a  big problem for German cricket, despite moves to work more closely with the country's national Olympic body (DOSB), and open a new national performance centre in Krefeld, to the north-west of Dusseldorf.

"We're talking about 400 percent growth in clubs and members in the last six or seven years, and the facilities haven't grown at the same speed," says CEO Mantle.

Germany still has no grass wickets, and most of the grounds double up as football or rugby pitches, meaning the outfields are often uneven or overgrown.

The slow outfields affect the way German players play the game, explains Knox, with batters preferring to hit the ball in the air and fielders less likely to dive and slide.

Yet there is hope that the appearance in the global qualifier will help boost cricket's profile in Germany, despite frustration that the games will be shown on the ICC's registration streaming app, rather than on national TV.

"It's not going to reach as many people in Germany as we would have liked. But we just have to go out there and do the best we can. If we cause an upset and beat Ireland, I'm sure that will get coverage," says Knox.

Captain Ganesan, meanwhile, is dreaming of a chance to play the very best in world cricket.

"I'd love to bowl against Rohit Sharma or Virat Kohli," says the Indian born off-spinner. "Or against the English batsmen. They are phenomenal in white-ball cricket, so that would be an exciting challenge."

Germany meet Bahrain in their opening game in Oman on Friday.