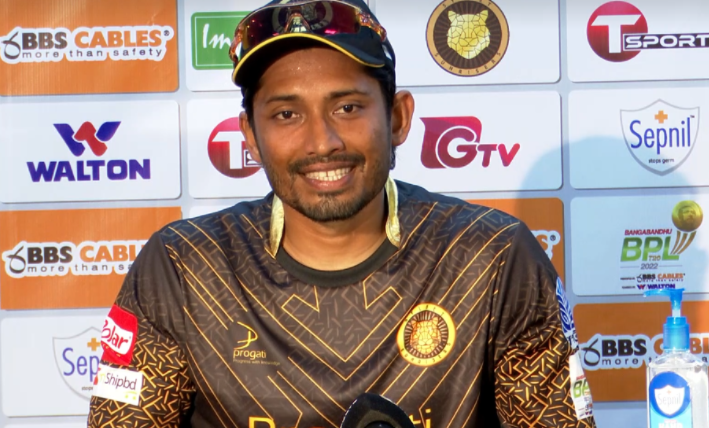 In the day’s match of Bangladesh Premier League (BPL) on Saturday, Sylhet Sunrisers bundled for only 96 runs, counterparts Comilla Victorians have also struggled to chase down the low target. In the end, they won by two wickets with eight balls in hand.

However, after the match, Sylhet's experienced wicket-keeper batter Anamul Haque Bijoy has blamed the wicket of Mirpur’s Sher-e-Bangla Stadium.

Sylhet's opener started the batting collapse as he was dismissed for 3 off 9 balls. Colin Ingram, his opening partner, scored 20 runs. This is the highest individual innings of the match between the two teams.

After the match, Anamul said, the batter from both sides were suffering because of the wicket.

"We didn't think the wicket was suitable for T20. It is difficult for batsmen to bat here. There was turn and also wet, which is why the batsmen could not play comfortably. Both teams played similarly and it seemed difficult to me. If there are such wickets in T20, it is difficult to get runs. That's why there was lack of runs," said Anamul.

After losing the toss, Sylhet sent to bat first. According to Anamul, this is also one of the reasons for their loss.

"We all have seen the wicket. We did not get the type of wicket they wanted," said Bijoy. "If we had won the toss, we would have fielded first too. That's the way to go in the tournament so far. You all have seen how much the ball was turning. It was extremely difficult for the batters out there."

Comilla captain Imrul Kayes, however, gave credit the bowlers of his team, who bowled according to pitch condition.

"The wicket was a little tough in the first half and our bowlers bowled very well. Batted according to the plan. Chasing runs in a low-scoring match is always a little harder, it becomes harder to plan,” Imrul said.