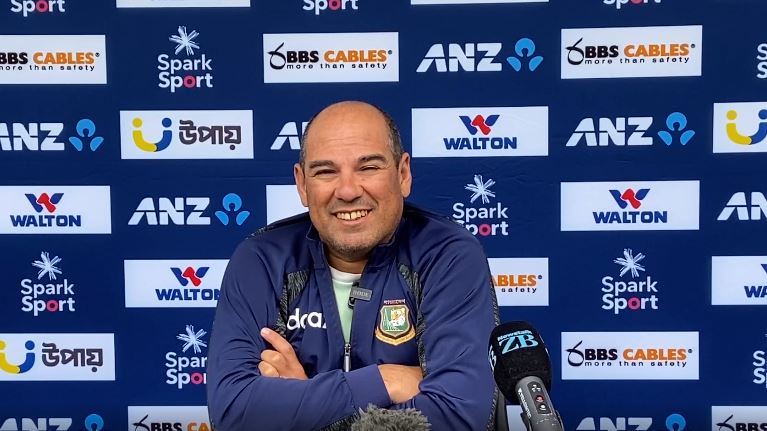 Bangladesh have not won a match in any format before winning the Mount Manganui Test on New Zealand soil, now have a chance to win the series. Bangladesh head coach Russell Domingo said Tiger cricketers are thrilled to seize the opportunity before the start of the second Test.

The second and final Test match is set to begin tomorrow (January 9) at Hagley Oval in Christchurch. The series will be confirmed only if Bangladesh, which is leading 1-0, can draw. And that is why any Asian team will win the Test series on New Zealand soil after 2011.

Speaking at a press conference on the eve of the match today (January 7), Domingo said: "I told in the previous press conference that this is a very young team. Experienced campaigners, who have played in New Zealand before have not come. These youngsters want to build a long career in Bangladesh cricket. They are very energetic. No Bangladesh team have won a series in New Zealand before,”

“They are excited about it now. The boys want to do something special. They are in a good mood. Opportunities like this don't come around very often. You're confident, you're playing well and you've got a good balance to your side at the moment and conditions. The boys are thrilled” he added.

The South African coach believed toss is very much important in the upcoming Test and he has confirmed Bangladesh will bowl first if they win the toss.

“The toss is going to be very important. The team that has batted first has won only one match in the last 10 matches. Here the first innings average score is 260-270 runs. The first day is very important for using new balls. If New Zealand wins the toss they want to bowl, we want it too,”

“New Zealand are a quality team, they have suffered from this defeat. However, before the second match, they will be a little nervous. Maybe one or two changes will be seen on the field, want to draw the series with a win. There will be a little pressure on them as they are playing at home,” he added.