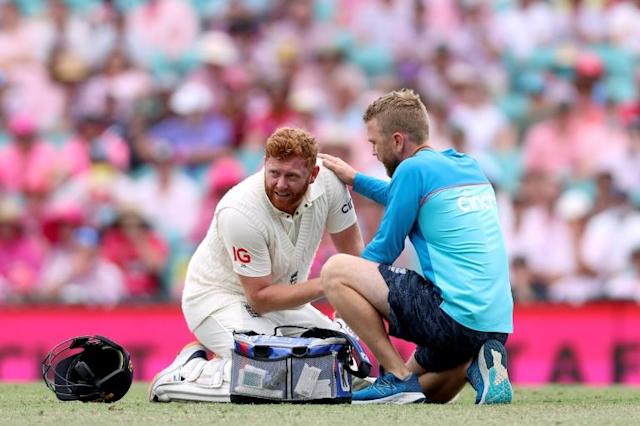 Nothing was going to stop an emotional Jonny Bairstow from realising his ambition of scoring an Ashes century in Australia -- not even a nasty blow on his thumb during the fourth Test in Sydney on Friday.

The 32-year-old typified the grit of a counter-punching 128-run partnership with injured Ben Stokes to raise his first Test century in Australia, and England's first on a demoralising tour with the Ashes relinquished inside 12 days.

Bairstow turned the tide and gave the tourists something to cheer finally with his unbeaten 103 off 140 balls, studded with eight fours and three sixes.

There was also some emotion for this Test, which started on the 24th anniversary of his father David's sudden death.

Bairstow looked to the heavens as he achieved his goal.

"I'm extremely proud, I had to dig deep," he said.

But his spirited knock didn't come without pain after he suffered a nasty blow on his right thumb from Pat Cummins, which for a time threatened to cut his innings short.

Bairstow was on 60 when Cummins dug one in and it crushed his thumb holding the bat.

He needed treatment from the team physio, painkillers and strapping before he bravely continued to defy Australian attempts to get him out.

"It takes quite a bit to get me off the park. Yes, it was sore but the circumstances of the game, it was one of those where it was a decision I made to stay out there,” he said.

“The medics can give you advice but you’re playing in an Ashes Test match, New Year’s Day Pink Test match at Sydney in front of a big crowd, it’s going to take a lot to get you away from that.

"I might get an X-ray on it tomorrow but I reckon I'll still be there in the morning."

Bairstow went out to the SCG middle under pressure to score runs. It was his first Test century in 38 innings since making 110 against Sri Lanka in Colombo in November 2018.

He howled with delight upon hitting Cummins to the ropes to bring up his ton.

"I went back to some things with my technique which I used a couple of years ago," he said.

"I was relieved and overjoyed," he added.

"I felt I was playing nicely in Melbourne (previous Test) but when you've not been out in the middle, you need time to get your rhythm going."