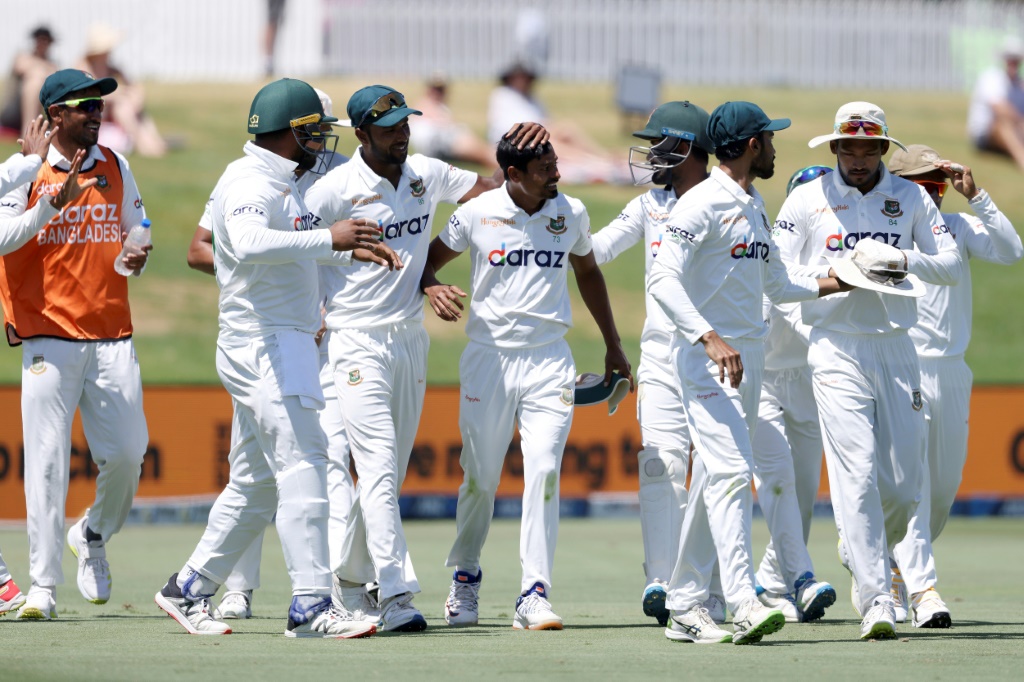 Bangladesh cricket fans were ecstatic after waking to learn of their first-ever victory on New Zealand soil with Wednesday's crushing, eight-wicket Test win.

Dawn was breaking as news of the team's triumph came through, with chilly weather and a recent jump in coronavirus cases keeping public celebrations subdued.

But thousands took to social media to share footage of dressing room celebrations after Mushfiqur Rahim cut Kyle Jamieson for a boundary, sealing what was just the sixth Bangladesh Test win away.

Four members of Bangladesh's famed 'fantastic five' heaped praise on the Tigers, who made history at Mount Maunganui.

Star batsman Tamim Iqbal, who missed the tour due to injury, was among the cricketers revelling in the historic moment.

Opening batsman Tamim Iqbal, for whom the New Zealand Tests came too soon in his road to recovery from thumb injury, posted, "Incredible win, historic win. Congratulations to the entire team.

"Year after year, one tour after another we returned home from New Zealand empty handed. The situation was even tougher this time due to a lot of reasons. But the team overcame all obstacles and brought us this nice victory. Beating New Zealand in New Zealand is one of the toughest assignments in world cricket right now. We showed, we can do it!

"The most pleasing thing is this victory was achieved entirely due to team effort. The team played the game with spirit. No praises are enough to describe Ebadot's outstanding bowling. From Joy to Shanto, Liton to Miraz, Yasir, even substitute fielder Taijul with the brilliant last catch and each and every member of the team, the victory was down to their collective contributions,"

"Even then I want to mention someone in particular. During the toughest of times, when no one put their trust on the team, and at times when even some players inside the team were self doubtful, only one didn't lose his faith. He always had the faith and with his conviction tried to instill faith in the team - We can do it, we can obviously do it. There were bad days and bad performances. Even then he didn't lose faith in the team. He feels strongly about Test cricket, and always places utmost importance on Test cricket.

"Hats off for our captain Mominul Haque."

All-rounder Shakib, who missed the tour of New Zealand after taking leave, wrote on social media, "The Tigers celebrate a rip-roaring victory against the Black Caps. Congratulations to the entire team! What a way to start the year for Bangladesh cricket. Big congratulations to captain, players and coaching staff."

The match was wrapped up in one session on the final day as Ebadot Hossain took a career best six for 46 and New Zealand were rolled over in their second innings for 169.

It was a "David and Goliath" result, with Bangladesh ranked ninth in the world while world Test champions New Zealand are second.

It was also New Zealand's first loss in 16 home Tests over the past four years.

The second Test starts in Christchurch on Sunday.