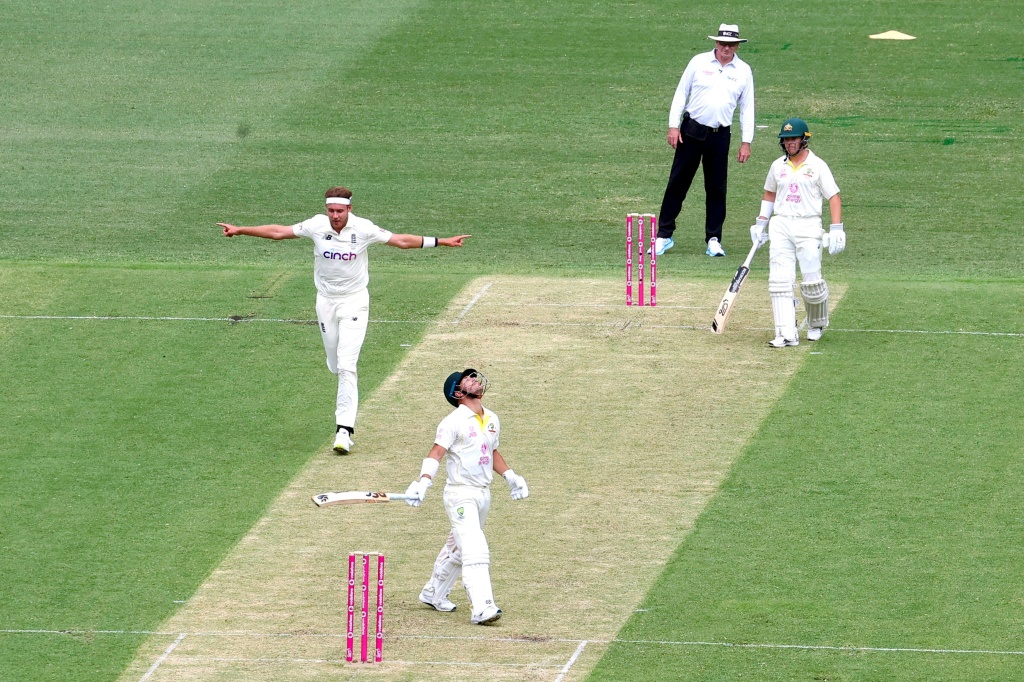 England hit back late on a rain-marred opening day of the fourth Ashes Test to put Australia under pressure at the Sydney Cricket Ground on Wednesday.

Australia, holding an unassailable 3-0 series lead, looked in a strong position at 111 for one before pacemen James Anderson and Mark Wood struck in the space of seven balls.

At the close after only 46.5 overs were possible following four rain interruptions, Australia were 126 for three with Steve Smith on six and Usman Khawaja, playing in his first Test since 2019, not out four.

Marcus Harris, coming off his 76 in Melbourne, batted obdurately for his 38 off 109 balls before he was stuck on the crease and nicked Anderson to Joe Root at slip.

In the next over Wood, charging in, got the prized wicket of Marnus Labuschagne for 28 leaving Australia at 117-3.

Wood angled one back off a length and Labuschagne, looking to defend from the crease, edged to Jos Buttler in a crucial double breakthrough for England.

It was the 13th time in Ashes Tests Broad had snared his "bunny" Warner after tempting him to drive at a shorter delivery.

Broad dominated Warner during the 2019 Ashes in England, tormenting the experienced Australian opener from around the wicket and dismissing him seven times in the space of 104 balls.

Warner, who looked in good nick following scores of 94 and 95 earlier in the series, had a big moment on 21 when he edged Ben Stokes just past the outstretched hand of Crawley in the slips for one of his six fours.

His dismissal came just four balls before the third rain break of the day and sent players from the field with Australia 56-1.

Australia, chasing their fourth consecutive win of the series, won the toss and chose to bat.

The Ashes are already gone for Joe Root's England after going down by an innings and 14 runs inside three days in the third Test at Melbourne to give Australia an unassailable 3-0 lead with two Tests to play.

It followed heavy defeats in Brisbane and Adelaide, where batting collapses, poor fielding and questionable selections cost the tourists dearly.

The Sydney Test was also a milestone for Root, leading England for a record 60th Test -- passing Alastair Cook's captaincy mark of 59 games in charge.

"I want us to keep working really hard at all facets of the game," Root said at the toss of England's challenge in the remaining two 'dead' Tests of the series.

"It's important that we keep believing and understand that things do change in time. We've got to be strong and resilient and take those chances."

England's last Test win in Australia was at the SCG in January 2011.

Meanwhile officials said batsman Travis Head would rejoin the Australia squad on Friday pending a negative test result after his Covid isolation period, which forced him to miss the Sydney Test, ends on Thursday.