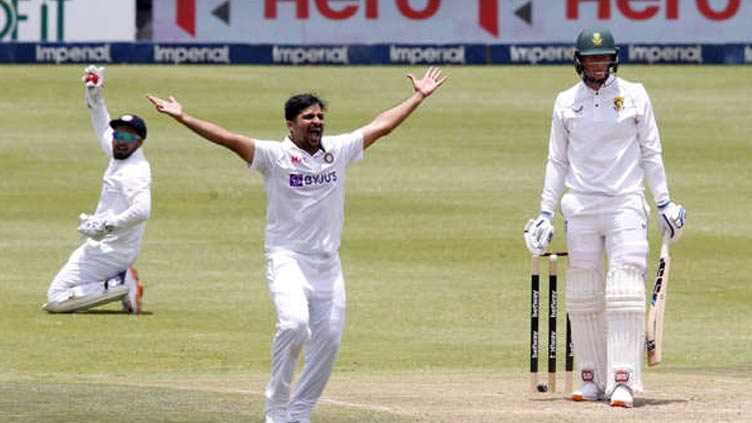 The extra responsibility of effectively becoming India’s third seamer spurred Shardul Thakur to a career-best performance on the second day of the second Test against South Africa at the Wanderers Stadium on Tuesday.

Thakur took seven for 61 –- the best figures by an Indian bowler in Tests against South Africa –- as the hosts were bowled out for 229, a first innings lead of 27.

India reached 85 for two at the close, an overall lead of 58 runs, to finish the day with their hopes alive of clinching a series victory with a match to spare on a pitch offering plenty of help to bowlers.

"My mindset changed since I was the third seamer," said Thakur, who was forced to step up because of an injury to fast bowler Mohammed Siraj.

Although Siraj had recovered enough from a hamstring injury to take the field on Tuesday he was clearly below his best and bowled only six largely ineffective overs.

With Jasprit Bumrah and Mohammed Shami having bowled superbly without reward in the first hour of the day, South Africa were threatening to take control and India needed someone to change the momentum.

Thakur stepped up, ending a second wicket partnership of 74 between Dean Elgar (28) and Keegan Petersen (62), dismissing both batsmen and adding the wicket of Rassie van der Dussen for a single in a dramatic half hour before lunch.

Temba Bavuma (51) and Kyle Verreynne (21) added 60 for the sixth wicket before Thakur trapped Verreynne leg before wicket and had Bavuma caught down the leg side by Pant.

Thakur then ended some tail-end resistance by taking the last two wickets off successive balls.

“The mindset I have is that I have to take a wicket with each and every ball,” Thakur told SuperSport television. “If it’s the first over or the last over I’m thinking of taking a wicket, irrespective of what’s on the (score) board.”

Thakur, 30, played a relatively minor supporting role in India’s 113-run win in the first Test in Centurion, with Bumrah, Shami and Siraj doing most of the damage to the South African batsmen.

"It was unfortunate that Siraj got injured but in overseas conditions all the seamers have an important role to play," said Thakur.

Bowling at slightly less pace than his fellow seam bowlers, Thakur revelled in the seam-friendly conditions on a pitch which he said "is going to get tougher and tougher".

Thakur’s best in five previous Tests was four for 61 when a spate of injuries to Indian players provided him an opportunity to play a starring role in a series-clinching win against Australia in Brisbane last January.

He took a total of seven wickets in the match and also top-scored with 67 in the first innings.

He acknowledged that his performance in Brisbane was a “big boost” to his career.

"I have always loved playing red-ball cricket," he said. "I had played enough first-class cricket and was waiting for the opportunity at international level."

Tuesday’s innings was a breakthrough for the slightly-built Petersen, whose highest score in three previous Tests was 19.

He has had to come in to face an almost new ball in each of his innings but showed composure and good shot selection in making 62 off 118 balls with nine fours.

"It was good bowling this morning," he said of the challenge of facing Bumrah and Shami.

"They came out firing. It's the sort of wicket where you never really feel you are in so it's a case of pouncing on the odd bad ball. There weren’t many."

India came out with attacking intent in the second innings, scoring at better than four runs an over despite losing opening batsmen KL Rahul and Mayank Agarwal.