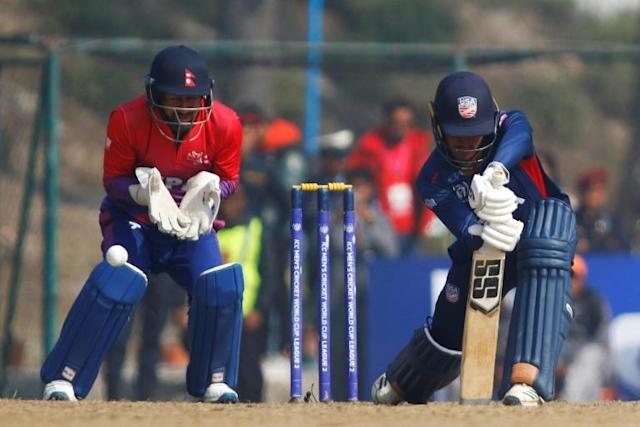 The United States scored a famous and deserved T20 cricket triumph over Ireland on Wednesday to get the most important series in their history off to the best possible start.

A brilliant 65 from Gajanand Singh helped the hosts reach a competitive 188 for 6 in their 20 overs and some disciplined bowling from Saurabh Netravalkar and Ali Khan helped keep the Irish at bay to secure an opening victory in the five-game set, the first USA home series ever against a Test playing nation.

The United States, wanting to compete at the very highest level, will need more performances like this to stand them in good stead moving forward.

Ireland had never lost to an American side coming into the clash, thrashing them four times in T20 World Cup qualifier tournaments from 2010 to 2015.

But the visitors were distinctly second best in Florida as the US notched their best-ever win against a Test playing nation in the Twenty20 format.

"This is a good start," spinner Nisarg Patel, who bowled well in taking 2-27, told AFP.

"We've been playing well for the last year and a half. Winning against bigger teams like Ireland will send out a good message across the country and the world.

"Hopefully we can keep it going."

It was the first of five games  -- two T20s and three one day internationals -- between the sides, with Ireland's arrival in the United States complicated by some Covid-19 cases in the camp.

Reaching the World Cup in either format, as well as possibly competing in the 2028 Los Angeles Olympics,remains the US aim while moves are well underway to establish an American professional competition, Major League Cricket, within the next two years.

Young players are also being produced, with 18-year-old Ritwk Behera, born in Rockville, Maryland, and New Jersey native Yasir Mohammad the only players in the starting XI at the Broward County Stadium who were born in the United States.

Skipper Patel's side were desperate to make a strong start and show the lively couple of hundred fans in attendance as well as the International Cricket Council (ICC), the sport's global governing body, the team was deserving of future high-profile series.

Early stages against a new look Ireland side aiming to bounce back from a disappointing T20 World Cup showing were a struggle for the US team, which slumped to 16 for four quickly, which included losing captain Patel to the second ball of the match.

But a brilliant fifth-wicket stand between Singh and Sushant Modani helped turn the tide for the hosts. Their partnership of 110 saw Singh lay into a Irish bowling attack that seemed to alarmingly wilt in the Florida sun.

Singh smacked the first six of the match in the 12th over -- a sign of just how slow the US came out of the blocks -- and proceeded to hit four more maximums in a splendid, crucial innings of 65.

Modani weighed in with an equally important 50 before Marty Kain, one of five debutants for the home side, crushed a quick-fire 39 from only 15 balls to reach a very competitive target of 188 for six from their 20 overs.

Ireland's bowling at the death was woeful and their batting response suffered the worst possible start when captain Andy Balbirnie was dismissed in just the second over.

A breezy 31 from 15 balls from opener Paul Stirling, however, steadied the ship and at the halfway point, Ireland were 74 for three and a close finish beckoned.

The Americans hung in, however, and allied by some tight bowling and excellent fielding, the visitors found themselves needing a daunting 76 from 37 balls, which was way beyond them.

The teams meet again on Thursday before playing 50-over games on December 26, 28 and 30.