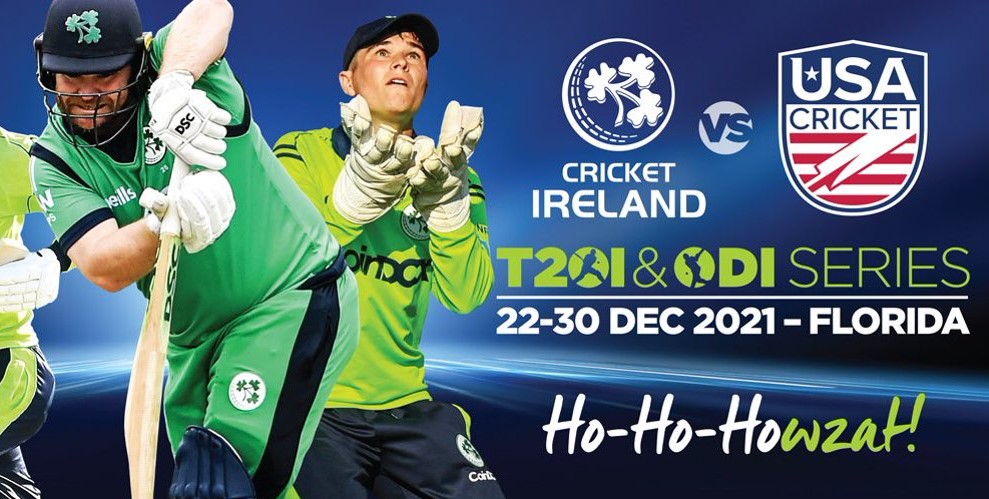 Cricket in the United States will break new ground next week when Ireland embark on a landmark five-game tour as moves continue to establish the game in North America.

The two Twenty20 and three one-day, 50-over international matches (ODIs) taking place in Lauderhill, Florida starting on Wednesday will be the first time the US national team has faced a Test-playing nation on home soil.

That in itself will serve as an important moment for American cricket, which has failed to take root in the United States despite first being played in North America in the 18th century.

Yet with firm plans in the works to help establish a T20 professional League within the next two years, which in turn may boost chances of cricket making its Olympic debut in Los Angeles at the 2028 Games, the timing of Ireland's visit couldn't be better.

Furthermore, this is the first home series since confirmation that the US will co-host the 2024 T20 World Cup with the West Indies.

USA are currently ranked 18th  in the world for ODIs, according to the International Cricket Council, the sport's governing body, and although Ireland are currently 12th -- for T20 the rankings are 30 and 13 respectively -- there is a strong belief that the Americans can upset the form book.

"This is the biggest home series we have had," USA captain Monank Patel told AFP.

"This means a lot to the team and this acts as the start for the global qualifiers for the big tournaments coming up," the Gujarat-born wicketkeeper added.

"Playing well against Ireland will send out a big message to the other associate teams we compete with."

US optimism is also based on the emergence of a promising crop of youth players, which includes highly-rated wicketkeeper Rahul Jariwala, 17, and 19-year-old left-arm spinner Vatsal Vaghela, who have both earned call-ups for the first time.

Both come from Northern California and impressed recently in a 50-over National Championships.

"The improvement and skill level is increasing all of the time," added New Jersey-based Patel, who has been part of the squad for the last four years and also coaches the next generation as well as plays.

"The youngsters are being given a chance to showcase their talent."

Led by San Francisco 49ers executive CEO Paraag Marathe, USA Cricket has reformed and refocused, not only looking to establish strong community links but also pushing the national team further into the conversation.

USA Cricket claims there are over 200,000 playing at the grassroots, mostly of South Asian heritage.

National success would help raise interest levels in the sport and although qualification for the most recent Twenty20 World Cup ended in failure, with another opportunity up for grabs in 2022, joining the party in Australia is a realistic ambition.

While no-one is suggesting that young American athletes will shun traditional sports like baseball or basketball in their droves anytime soon, the possibility of growing cricket remains.

"It's going to take time, we're not kidding ourselves and that half of Americans will fall in love with cricket overnight," said Indianapolis based Englishman Thomas Dunmore, Major League Cricket's VP of marketing.

"But with the size of this country and the predisposition of a good population already, they can be evangelists for the game and introduce new audiences to the sport. We can build it from there."

Ireland, who will leave the United States for the West Indies where they will play four matches including a T20 international starting on January 8th,  have arrived in Florida with a rejigged squad after some Covid-19 infections to some players and staff disrupted plans in the build-up to their departure.

The US roster, which has a number of players who were born in the United States interspersed with those of Indian and Caribbean heritage among others, has also been wary of the onset of new infections following the emergence of the Omicron variant although AFP understands the tour is not in jeopardy and will be completed without any problems.