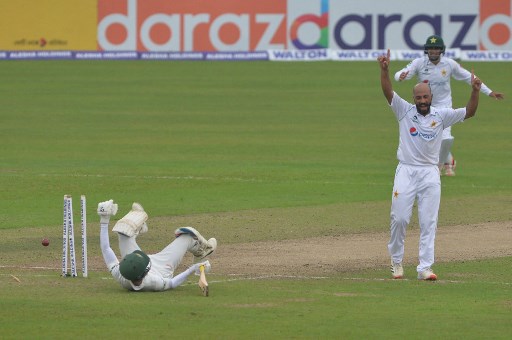 Bangladesh Test skipper Mominul Haque was disappointed following his team's loss to Pakistan in the second Test on Wednesday, saying he had failed to boost the side's fortunes in the longest format under his captaincy.

Pakistan won Bangladesh by an innings and eight runs in Dhaka, in a match hampered by rain, with more than two days of play wasted.

"At the end, results matter. Taking that into consideration, probably I failed to reform the Test squad. I don't think anyone here believes in the process. Without results, it is very difficult,” Mominul told reporters.

It was Mominul's eighth loss in 11 matches as captain. Bangladesh was swept in the two-match series after this setback.

Bangladesh's only two Test victories have come against Zimbabwe while he has been captain.

"Captaincy is challenging, not tough. I am in this seat because I took on the challenge. Not many take up this challenge. I think it is a privilege. When the team goes through such a phase, it is important how you react (as a captain). I am taking this positively” he added.