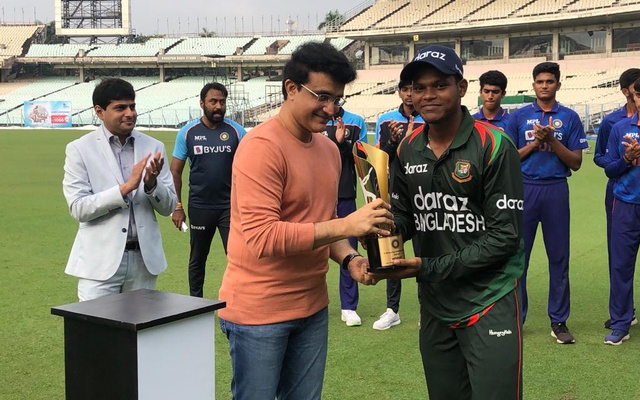 Naimur Rohman’s four-for and Aich Mollah’s heroic knock of 93 propelled Bangladesh to clinch the U19 Triangular Series, defeating India U-19 B by 181 runs at the Eden Gardens, Kolkata on Tuesday.

Bangladesh bowlers dominated the final match of the tri-series as Naimur took four wickets while Ashiqur Zaman and Meherob Hasan grabbed a couple of wickets to restrict India's U-19 B team on 53 runs.

Uday Saharan, the highest run-getter, scored 26 off 38 deliveries with two fours and Kaushal Tambe scored 11 runs. No other batters managed to cross the double digits.

Earlier, the visitors set 235 runs from the allotted 42 overs after being invited to bat first. Aich Mollah lead the side from the front after the openers failed to gave a good start. Aich fell short of 7 runs to hit a century but scored 93 off 91 deliveries with 10 fours and two sixes.

Bangladesh kept losing wickets at regular intervals while Aich supported Ashiqur, who played an important knock 50 off 58 runs that helped Bangladesh to put a decent target.