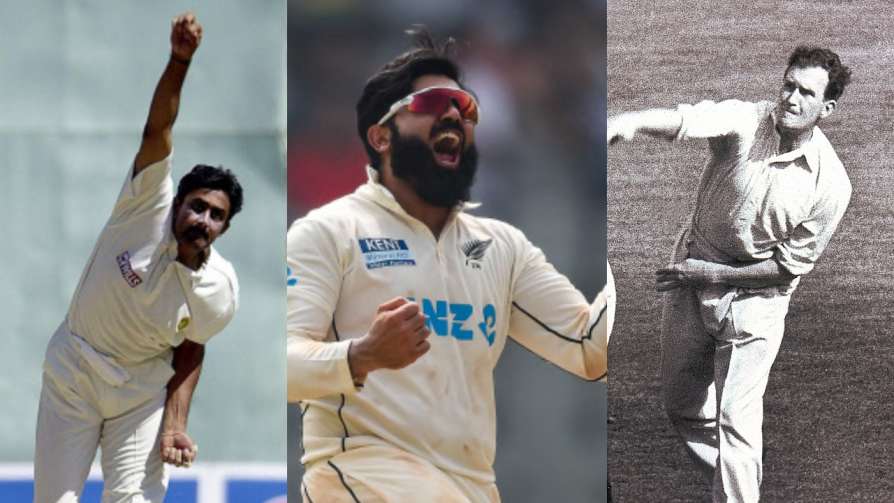 New Zealand's Mumbai-born spinner Ajaz Patel on Saturday claimed all 10 wickets in the second Test against India, becoming only the third bowler in cricket history to achieve the feat.

The England off spinner single-handedly led a rout of Australia in the fourth Ashes Test, won by the hosts by an innings and 170 runs at Old Trafford.

Laker claimed all 10 Aussie wickets to bowl out the tourists for 205 while following on. He returned figures of 10-53.

He claimed 19 wickets in the match after he took nine to skittle Australia for 84 in response to the home side's 459. The only other wicket went to left-arm spinner Tony Lock.

Don Bradman said at the time it was a feat unlikely to be equalled.

The legendary Indian leg-spinner turned on the heat against arch-rivals Pakistan at Feroz Shah Kotla to emulate Laker's feat after more than four decades.

He made an illustrious Pakistan batting order -- including Saeed Anwar, Inzamam Ul Haq and Mohammad Yousuf -- look ordinary after the tourists were bowled out for 207 while chasing 420 on day four of the second Test.

He got Wasim Akram as his last scalp to trigger wild celebrations, and clippings of the moment are still shown on TV re-runs in India.

Kumble later called the achievement "one of my most cherished cricketing moments".

"Jumbo" as he was fondly called, finished his career as India's leading wicket-taker with 619 scalps.

The Kiwi spinner is the latest to join the illustrious 'Perfect 10' club as he bamboozled the Indian batsmen in their own backyard at Mumbai's Wankhede Stadium.

Ajaz, who left Mumbai for New Zealand with his parents in 1996, returned figures of 10-119 to bowl out India for 325 in the first innings.

He took down skipper Virat Kohli and Cheteshwar Pujara for ducks in a memorable show of bowling that he rated "special" coming on his home soil.

Kumble welcomed Ajaz to the club, and the elated 33-year-old later said he had watched highlights of the Indian spin wizard's heroics against Pakistan many times.

Indian icon Sachin Tendulkar tweeted: "Congratulations #AjazPatel on picking 10 wickets in an innings in Test cricket. Achieving this rare feat at home away from home is truly special."