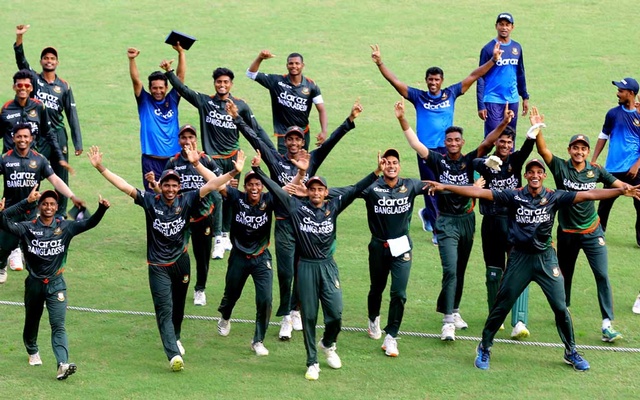 In reply to Bangladesh's 230 at Eden Gardens in Kolkata, India were bowled out for 224, thanks to Tanzim Hasan Sakib and Meherob Hasan’s bowling.

The hosts went down to chase and fell into disaster at the beginning. Despite losing wickets at regular intervals, only opener Angkrish Raghuvanshi fought for his team.

Among the bowlers of Bangladesh, Shakib took 3 wickets for 29 runs. Meherob got 3 wickets for 36 runs, while Ripon Mandal also took 2 wickets.

Earlier, after losing the toss, Bangladesh got off to a good start as opener Iftekhar Hossain (15) was dismissed during the team's 50 runs but the run wheel remained active.

Mahfijul Islam and Nowroz Prantik Nabil put on 68 runs for the second wicket. Mahfijul was dismissed for 56 off 79 balls. Nabil, on the other hand, scored 62 off 65 balls. Bangladesh were bowled out for 230 in 47.2 overs as no one played a responsible role in the middle order.