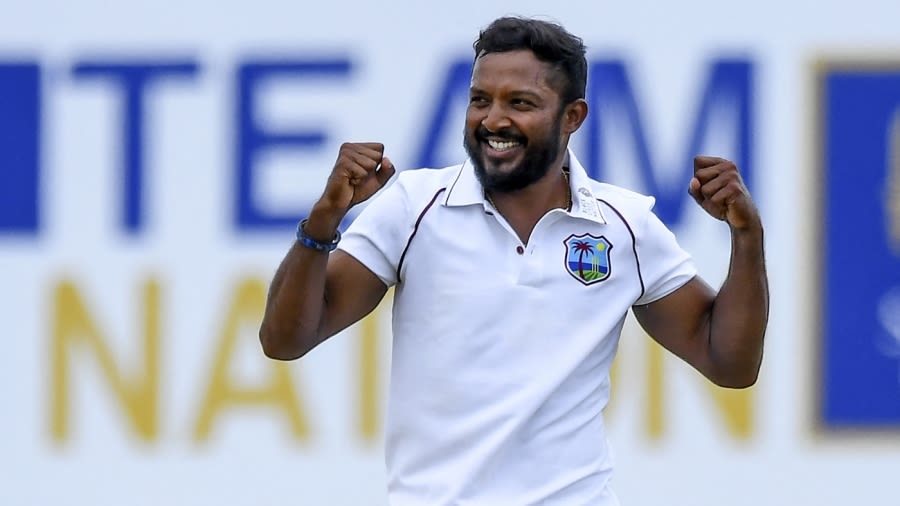 Veerasammy Permaul's five-wicket haul put Sri Lanka in trouble with the West Indies' batting openers already chasing down the hosts' lead on day two of the second Test in Galle on Tuesday.

Rain interrupted play half an hour before tea and it did not resume, in a match that has been plagued by inclement weather and bad light, with the tourists trailing by 135.

Permaul's first long-format match in six years helped bowl out Sri Lanka for 204 on the second day with a career-best 5-35.

"Over the years I've been working hard to get back into the team and glad it all worked today," he said.

The West Indies' decision to play two left-arm spin specialists proved a masterstroke against a side heavy with right-handed batters.

Permaul and fellow left-arm spinner Jomel Warrican, who claimed 4-50, cut through the Sri Lankan order on a wicket with plenty of turn and bounce.

"Great to bowl in tandem with Jomel. He kept things tight, putting pressure. We are pretty happy with the status quo," Permaul said.

It was the fourth time in history that West Indies spinners claimed all 10 wickets in an innings. Off-spinner Roston Chase had claimed captain Dimuth Karunaratne on day one with Sri Lanka resuming overnight on 113.

"Great pitch for spinners and there is bounce as well, which makes them even more dangerous," said Sri Lanka batting coach Grant Flower.

Sri Lanka bank heavily on skipper Karunaratne and when he doesn’t deliver, the team struggles against spin.

"Obviously Dimuth is our key player. If he doesn’t get a big hundred, the others need to put their hands up and cash in," Flower said.

"Not a good effort by the others but I am sure they will come good in the second innings."

Blackwood left on 44 when Praveen Jayawickrama trapped him leg before, ending a stand of 62.

Overnight batsman Pathum Nissanka had offered a couple of half chances in the morning, but his luck ran out when Permaul trapped him leg before wicket for 73 off 148 deliveries.

Permaul had a second wicket in the same over when Dhananjaya de Silva was caught behind by wicketkeeper Joshua da Silva.

Things went from bad to worse for Sri Lanka when Angelo Mathews, their most experienced batter, briefly retired with a pulled hamstring.

He returned after just under eight overs and managed to lift the team over 200, despite struggling to run between wickets, with consecutive sixes off Warrican.

He was last man dismissed, for 29, and did not go out to field.